Ford has announced that it has begun using the Microsoft HoloLens device to improve efficiency in the design process, a move which will affect its global production.

Representatives for the popular Ford announced last Thursday its plans to accelerate testing efforts for the Microsoft HoloLens headset, a technology which can be used in a number ways to improve the steps involved in the overall car design process.

A few important specs about the headset:

• The device is self-contained, so you can work hands-free.

• The holographic computer allows 3D interaction with the design components and digital content, achieving a mixed reality effect, one that combines the digital and the physical worlds.

• A combination of sensors, advanced optics and a specially-made holographic processing unit were used to enhance the holographic computing experience.

• Extra features like the ability to overlay holograms and sketches on physical objects from Skype users means an enhanced method sharing communication about design specifications and modifications.

• The device works with an effective combination of three features (GGV): Gazing to move the cursor, Gesture to open apps and manipulate images and items, and Voice-directed commands through the use Cortana software.

There are some who may fear that this could be the case of technology moving in to take over the need for human labor, but Ford has been quick to reassure the members of its global workforce that this is not the case.

Ford Vice-President of Vehicle Components and Systems Engineering Jim Holland says of the decision to use the technology, “It’s amazing we can combine the old and the new – clay models and holograms – in a way that both saves time and allows designers to experiment and iterate quickly to dream up even more stylish, clever vehicles…Microsoft HoloLens is a powerful tool for designers as we continue to reimagine vehicles and mobility experiences in fast-changing times.”

Lloyd VandenBrink, modeling manager at the U.S.-based Ford Truck Studio in Dearborn, Michigan, explains the logic behind why the old method of clay modeling should be maintained: “Clay has two characteristics that make it good for use. It’s easy to change — you just add it, or take it away. It allows you to be creative and come up with something quickly. 3D printing, on the other hand, is just that — printing. Secondly, it’s a great collaborative tool, [which means e]veryone can get around it, brainstorming three-dimensionally.” 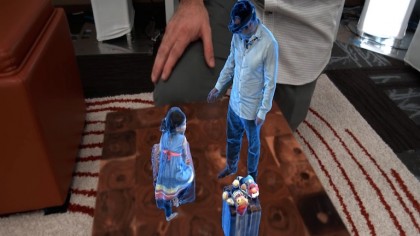 With the design features of this device, overall communication efforts will be enhanced between design steps and iterations, essentially combining several steps in one. Adjustment time to the new process would be significant for the more than 170,000 global staff it employs, yet representatives believe that the results of the transition will prove worthwhile. Jim Holland adds, "If HoloLens can help us test ideas without worrying about the cost of expensive clay models or prototypes, then we can liberate teams to be as creative as possible.” In other words, with this decision, the company has little to lose and very much to gain.

17 Futuristic Car Designs from Visionaries of the Past

1968 Ford Mustang from Bullitt Goes for $3.74 million at Auction