One of America's largest automotive companies is partnering with a popular bike company and software engineers to create innovative software that could save lives.

Ford Motors is looking to dive further into AI communications, particularly with bike-to-vehicle (or B2V) communication. The American automotive giant recently announced partnership with software company Tome to boost the safety between cyclists and drivers.

Ford is also working with Trek Bikes, and the two will join ten other bike-industry companies to form an executive advisory board on the technology.

"Bicycle and automotive safety innovation extend beyond any single company, city or technology," Jim Holland, Ford Motor Company vice president of vehicle components and systems engineering, said. "In the City of Tomorrow, a mobility system will see all modes of transportation speaking a common language and working together."

"Assembling this advisory board of industry leaders and business competitors underscores how important the work to get there is and highlights the support and organization that will be needed to set the cross-industry standards for years to come," Holland continued. 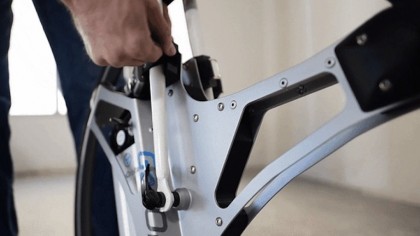 Transform Your Bike into an Electric Bicycle with No Tools

The Tome system attempts to reduce the number of bicycle-vehicle collisions each year. In 2016, there were over 18,000 cyclists injured on roads in the United States, and 102 cyclists died as a result of bicycle-car collisions. For over a year, Tome, Trek and Ford Motors have been working on proof-of-concept technology to help solve common issues such as visibilty and unclear road markings for cyclists.

“Trek is dedicated to actively seeking innovative ideas and working with like minded partners on easily-accessible solutions that will enhance the safety of cyclists and pedestrians,” said Scott Kasin, electronic products manager for Trek Bikes. “Working with the automotive leaders and bicycle industry competitors is a momentous step in forming a bipartisan advisory board that will oversee the development of bicycle-to-vehicle (B2V) safety solutions. We’re excited that both the cycling and automotive industries have seen the value and potential that B2V has and will be collaborating to bring it to life.”

"Tome engineers have focused their efforts on mapping and infrastructure, using artificial intelligence to evaluate and identify safety measures at specific vulnerable roadway locations, and are working with automotive industry engineers and smart city stakeholders to develop industry standards, like C-V2X, that work to keep cyclists safe on the road," Tome said in its B2V advisory board announcement.

"Putting the automotive and cycling industries together to work on identifying opportunities for safer roads has grown with support from Ford and Trek," said Jake Sigal, CEO for Tome Software. "The formation of the B2V Executive Advisory Board is another milestone in our collective effort to create long-term industry standards to keep cyclists safe. I’m honored to work alongside the brightest teams in automotive and cycling and look forward to leveraging the expertise of our board members to continue innovating for safety."