Software engineer Josh Redstone enjoys amateur baking and realized his measuring cup might be betraying his accuracy while making his favorite foods.

Innovation comes from recognizing a problem that everyone has and then setting out to solve it. For one man, noticing the inaccuracies of a traditional measuring cup led to making, developing, and selling his own. 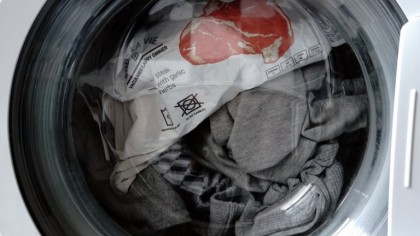 It doesn't sound like the type of issue a software engineer would trouble himself with, but Josh Redstone just couldn't shake the uneasy feeling he had baking one day.

"I had a two-cup Pyrex measuring cup -- the ones that stop at 1/4 cup with a bunch of lines inside -- and I was trying to get a quarter cup," Redstone told Interesting Engineering. "As I poured, there was a vague sense that this was a very bad idea for precision... But then I stopped to reflect on where this uneasy feeling was coming from.

"I realized that the whole situation was all about accuracy, and I wondered how I could change that vague feeling into something quantifiable. I then noticed it came down to measurement error beyond more than 'wow that’s a little, that’s a lot.' I could apply math."

And so he set out to do just that. However, Redstone isn't a traditional 'mathematician'; he feels uncomfortable with the title. He earned his Ph.D. in Computer Science from the University of Washington and spent most of his formal career at companies like Google and Facebook. Yet he noticed that there was a problem set before him -- one that combines math and physics, applying textbook problems to the physical realm.

"There’s a massive question here about the shape of a cup and the error, namely that the wider a cup is the harder it is to measure accurately," he said. "There was clearly a math angle, and I wanted to see what that was."

After years of going to and from the figurative drawing board, Redstone developed Euclid, a uniquely designed measuring cup that minimizes error for precision cooking.

"Let's suppose you overshot by 1 mm," Redstone explained on the Kickstarter page. "The measuring cup will then contain a thin layer of extra liquid. Its volume is 1 mm × the surface area. Your measurement error is the ratio of this extra volume to the desired volume.

"Euclid's shape preserves the ratio of surface area to volume as you measure more or less and so the ratio of extra volume to desired volume also does not change. This is why Euclid is just as accurate measuring small amounts as large amounts."

Redstone told IE that some of the biggest hurdles he overcame were in the actual manufacturing of the product. Traditional CAD systems wouldn't recognize the prototype designs, so Redstone made his own software instead. Once the design was finalized, manufacturing became its own headache.

"You can't just design something and have a manufacturer make it happen. There's a whole division of design manufacturing which I didn't understand let alone knew it existed," Redstone said with a chuckle. "So I quickly learned from talking with manufacturers that there are in fact restraints on the kind of things humans can make."

Throughout the process, Euclid's design became more refined while maintaining its accuracy. The naming process also took longer than anticipated, Redstone said. Finding a name that would stick with the product led to "a bigger struggle than I thought," Redstone noted, but ultimately, a friend suggested Euclid -- the father of geometry. The name stuck.

Now, thanks to crowdfunding, Euclid is on its way to becoming a reality. As of this writing, the company has doubled the $30,000 goal with over $60,000 already raised.

Interested in purchasing a Euclid measuring cup? Check out the Kickstarter page here.