The cargo vessel Grande America sank in the Bay of Biscay 10 days ago, taking 2,000 cars down with it to the ocean floor and creating an oil slick that is now threatening the beaches of Western France.

Cities and towns around the Bay of Biscay in France are bracing for the landfall of a major oil spill in the coming days, as 2,200 tons of heavy fuel makes its way to shore after the sinking of the Italian container vessel, Grande America.

Timeline of the Sinking of Grande America

Grande America, a 28,000 ton container vessel operated by The Grimaldi Group—based in the Italian city of Naples—left the Port of Hamburg, Germany on March 8th to start a multi-leg journey across the Atlantic Ocean to Brazil, visiting ports on the West and North African coast along the way, beginning with the Algerian port city of Casablanca.

SEE ALSO: 13 MOST BEAUTIFUL SAILING SHIPS OF ALL-TIME THAT WILL GIVE YOU TRAVEL ENVY

As the vessel passed the city of Brest, France in the early hours of March 10th, however, a fire is believed to have begun on one of the car decks of the ship, a roll-on/roll-off cargo hauler that vehicles are driven onto and off under their own power.

Though the crew of 26 tried to combat the fire, within hours, it had begun to spread to the cargo containers on the weather deck of the ship. Soon, the fire was engulfing entire sections of the deck, and there was little that any of the crew members, or their single passenger, could do but attempt to save themselves.

On March 11, the Captain radioed authorities to notify them that they would be abandoning the ship, about 150 miles off the coast of La Rochelle, in the Bay of Biscay. Boarding a lifeboat, the 27 people on board Grande America were picked up by a British naval vessel, HMS Argyll, which diverted to the area to provide assistance to their French counterparts, the Marine Nationale, who had taken charge of operations around the Grande America.

The Marine Nationale, along with local maritime firefighting units, tried unsuccessfully to put out the fires burning on the cargo vessels deck; they couldn't even slow it down. Fueled by the fires below beck that the responders' fire hoses could not reach, the flames continued to spread to more of the cargo containers while below deck, the intense heat likely weakening the structural integrity of the ship's starboard bulkheads and hull.

By March 12th, Grande America had started to heavily list to its starboard side, and with an inferno that French firefighters weren’t even close to containing, the Marine Nationale called off any further attempts to save Grande America.

The priority now was to prepare to contain the imminent environmental disaster that was sure to follow the sinking of the Grande America and they had to move fast. The sun hadn’t even set on the 12th before Grande America capsized and quickly went under, accelerating in its descent through the 15,000 feet of water between daylight and the floor of the Bay of Biscay.

Before the ship had gone down, thick, heavy engine fuel was already spilling out into the ocean from ruptured fuel tanks, and whatever fuel tanks were still intact likely didn't stay that way once Grande America smashed into the ocean floor.

Authorities in the region began preparing for the worst: 2,200 tons of heavy fuel from Grande America spilling out into the ocean, spreading out into a patch about 10 kilometers long and a kilometer wide, steadily drifting with the waves and currents of the Atlantic towards the shores of the coastal departments of Western France.

Brittany, Pays de la Loire, and Nouvelle-Aquitaine together form the contiguous front along the Atlantic Ocean that runs from the border with Spain to the northwesternmost peninsula of the country, a shoreline that might as well be a cupped hand, scooping up oil, and dumping it onto the beaches along the bay.

When Grande America left Hamburg, it was loaded up with just over 2,200 cars, predominantly Audis, ranging from the $32,500 Audi A3 to the $81,900 Audi RS4. More than two thousand cars, with a mean price of $57,200, are now destined to steadily rust and leach toxic chemicals into the water around the sunken ship, becoming a potentially toxic curiosity for the diverse range of aquatic life that lives at 15,000 feet below sea level.

Notably, there were 37 Porsches on board Grande America when it sank on their way to buyers in Brazil—four of which were some of the last Porsche 911 GT2 RS models—valued at nearly $300,000—the company had produced, having discontinued the vehicle last year.

After news of the sinking of Grand America made the news, Porsche issued a statement promising to deliver for their elite buyers. 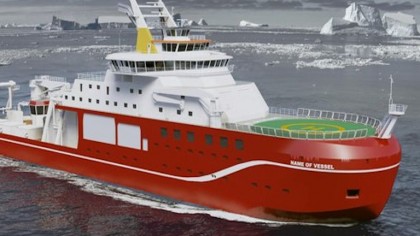 “Porsche Brasil confirms that 37 of its new cars, in route from Hamburg, Germany, to Santos, Brazil, were aboard the vessel Grande America that suffered a maritime incident near the coast of Brest, France, on March 12, 2019. Among the fleet were four 911 GT2 RS units.

“In a special decision and to uphold its commitment to its valued Brazilian customers, Porsche has ensured that those units will be reproduced in the order in which they were originally confirmed.”

As for Audi and the other automakers who had shipped out this latest round of inventory to their dealerships in Africa and South America, it will likely take time for the automaker to manufacture or source replacement vehicles for the ones swallowed up by the sea.

Assuming an average value for the non-Porsche cars was around $55,000, then the vehicles on board Grande America by themselves were worth around $125 million.

This dollar figure doesn't even factor in the 365 shipping containers on board Grande America, packed with all sorts of consumer goods and commodities that were also a complete loss. Taken together along with the vehicle inventories, it wouldn’t be a stretch to say that maybe a quarter of a billion dollars just sank to the bottom of the ocean, possibly more. Worse still, no one seems to know what exactly happened or how the fire that sank Grande America began, at least not yet.

Many of the residents around the Bay of Biscay understandably get anxious at the mere mention of an oil spill.

On March 16, 1978—almost 41 years ago to the day of Grande America sinking—the Amaco Cadiz, an oil tanker heavily laden with light crude oil from Saudi Arabia and Iran, ran into rough weather and, as a result, sustained substantial damage to its steering equipment.

Unable to direct itself, tug boats were called in to bring the Cadiz safely to port. The weather hadn't improved much since the Cadiz was disabled, so the tug boats could not safely carry out the operation, which led to a delay of several hours.

Meanwhile, the Cadiz continued to drift closer toward the shores of Brittany, making it even more perilous to attempt to tow the ship to safety.

Only 12 hours after they Cadiz was disabled, it ran aground. It's engine compartments flooded and this grounding also placed enough stress on the ship's structure that the vessel soon snapped across its midsection almost as if its back had been broken.

This rupture allowed the 2.2 million tons of crude oil to empty directly onto the shorelines up and down the Bay of Biscay, an environmental catastrophe that took decades to recover from.

Now, the oil slick making its way towards the coastline of La Rochelle is one-thousandth the size of the Cadiz oil spill, the largest ever in history, but you can hardly blame the residents for feeling anxious about the impact the sinking of Grande America will have on their local environment.

They only just recently got the place cleaned up, so having to confront another oil spill along their coastline is bound to agitate the residents all around the bay.

It shouldn’t be a surprise then that the regional prosecutor has opened up a criminal investigation into the disaster. French authorities aren’t taking any mess from The Grimaldi Group either, issuing Grimaldi Lines, which operated Grande America, an official demand to quickly assess the damage sustained by the sunken ship and do whatever they possibly can to prevent any additional fuel still contained within the ships fuel tanks from leaking out.

The company, for its part, is expressing a strong desire to cooperate with the investigation and recovery efforts. According to a statement from the company: “In the framework of its antipollution plan, the Grimaldi Group has immediately dispatched in the place of sinking of the Grande America the Anchor Handling Supply vessel Union Lynx which is monitoring any ship’s fuel spill and is organising the recovery of any floating container.

“A Grimaldi-appointed team of experts in marine casualties and pollution prevention is already in Brest in order to monitor the environmental situation and advise any further measures, always in coordination with the French Authorities.

“Moreover, in agreement with the French Authorities, the Grimaldi Group will undertake a submarine survey of the wreck, located at 4,600 meters sea depth, by means of the vessel Pourquoi Pas, equipped with a modern ROV (Remotely Operated Vessel).”

Others point out that the oil leak isn’t the only environmental disaster taking place. Down on the ocean floor, all of these vehicles are likely to have toxic chemicals leached out of them and into the ecosystem as the ocean currents perform their slow and steady erosion of the cars.

These chemicals have enormous implications for the marine ecosystem in the vicinity around the sunken container ship. Now we might look at the ocean floor around the boat and see a colorful, vibrant marine environment full of fish, crabs, eels, coral reefs, and who knows what else. In just a few years though, after the Bay of Biscay spends this time steeping those 2210 cars in ocean water like teabags, all sorts of toxic, poisonous chemicals are going to leach out into the water, possibly poisoning everything in the area.

"The toxic wastes carried by the #grandeamerica are way too deep underwater to be picked up. And fauna and flora are gonna pay for it." — Gildas Le Moal, French Climate Activist

Robin des Bois have reportedly signaled that they plan to file a criminal complaint about the environmental damage from the sinking of Grande America.

Gildas Le Moal, a French climate activist, seems to have summed up the general feeling of the communities along the Bay on Twitter this week as they await the oil slick that is certain to come ashore within the next few days.

“I live near this catastrophe. The toxic wastes carried by the #grandeamerica are way too deep underwater to be picked up. And fauna and flora are gonna pay for it, not the shipowner, not us for consuming useless stuffs produced everywhere on the Planet...

“We have to change.”