In the edition of the world's most epic YouTube video, TheBackyardScientist goes to the extreme to determine which force would prevail: a liquid nitrogen freeze-ray vs a flamethrower.

In the most intense battle ever, TheBackyardScientist determined once and for all which force would prevail in the fight against cold and hot. With a fiery flame thrower armed with engine starter and a freezing freeze-ray loaded with liquid nitrogen. In the hot vs cold duo, only one could remain as the victor.

After an intense one-to-one stand off, the coolness of the liquid nitrogen was able to defeat, or rather starve the fire of its glory (or oxygen supply).  The one canister contained the devastating engine starting fluid was a simple rig set up to spray copious amounts of fluid to provide maximum flame and wow. On the other side remained the liquid nitrogen gun, a gun utilized by dermatologists to decimate warts  and cancer with the power of cold.

With 70psi of intense bone chilling fluid, it is a remarkable piece of equipment to maintain the fluid while simultaneously retaining pressure. However, TheBackyardScientist was unimpressed by the standard output and so vamped up the competition. TheBackyardScientist attempted this by implementing a nichrome heating element within the canister to increase evaporation and intensify the gun. However, the device failed miserably. After further scientific experimentation thoroughly conducted it was discovered the best way to create more pressure and more wow is to shake the canister up, agitating the fluid.

It is important to know both of these weapons are incredibly dangerous and are improperly used by the experimenters. Both the flamethrower and liquid nitrogen gun could inflict serious irreversible damage to your body. It is imperative to handle these materials correctly. Please, do not (ever) try this at home- these people are professional idiots and have done it for you. 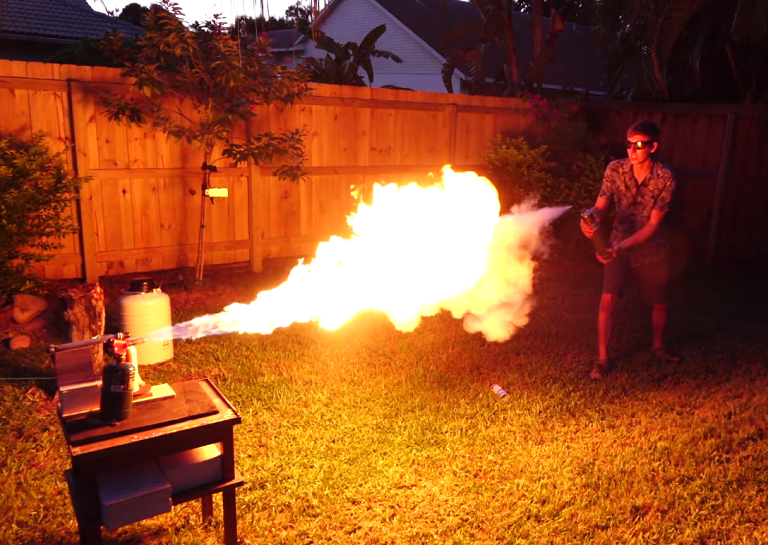