French Hospital Tests VR Technology as a Replacement for Anesthesia

A startup in France is implementing virtual reality technology that sees patients embark on a contemplative guided tour to help calm their anxiety and ease their pain.

Saint-Joseph Hospital in Paris is testing an exciting albeit still unsubstantiated approach to pain relief that does not require medication. The hospital has introduced the use of virtual reality (VR) technology to help relax patients in the emergency room and hopefully aid them with natural pain management.

“The virtual reality project ... enables us to offer patients a technique to distract their attention and curb their pain and anxiety when being treated in the emergency room,”  Olivier Ganansia, head of the emergency department at the Saint-Joseph Hospital, told Reuters. “I think in 10 years, virtual reality won’t even be a question anymore, and will be used in hospitals routinely.” 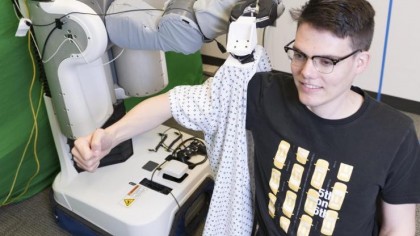 The VR used in this case comes from a French startup called Healthy Mind VR. The firm's website says the technology offers an alternative to traditional pain management by immersing patients in "natural realistic environments" of their choice, allowing them to forget their condition.

The site says the visual and auditory experience empowers patients to take control of their improvement and that studies have shown that VR can be twice as effective as morphine. The three studies referred to are a 2017 paper on the efficacy of VR in postburn physical therapy, research from 2016 on VR's impact on chronic pain and work from 2012 on the effects of VR on the elderly.

“What we offer is a contemplative world where the patient goes on a guided tour, in interactive mode, to play music, do a bit of painting or work out a riddle,” explained Reda Khouadra, one of the graduate students behind Healthy Mind VR. Khouadra's passion for 3D modeling and animation is said to have begun at the age of 12 when he used to print "soothing landscapes to offer them to his aunt who suffered from the Parkinson disease in order to ease her anxiety."

It is this experience that encouraged Khouadra to incorporate the growing emergence of virtual reality into a useful pain-alleviating healthcare complement. Healthy Mind VR was first tested at the Pasteur Lanroze clinic to "reduce pain and anxiety in surgery units, palliative care and the oncology department."

The system performed well and was reportedly well received by patients. For those particularly concerned with the many negative side effects associated with drugs, the technology provides a healthy and addiction-safe solution to pain relief.

This virtual therapy is based on a principle called Gate Control Theory. The theory stipulates the existence of nodes that control the way we perceive pain that can be inhibited through sensory-emotional stimuli.

The startup is a joint cooperation between three graduate students and a team of psychiatrists and doctors. The company was awarded a $20,000 prize from an Australian University to be used by the founders to travel to Seattle to pitch their product to Microsoft.