French surgeons had to make the second face transplant in the world to the same man who received the world's first facial transplant after his body rejected the face.

A Frenchman's body rejected a facial transplant he received over a decade ago. In an incredibly risky procedure, French surgeons got a second face from another donor and performed the first ever double face transplant.

Some medical experts believe that rejection will be something that plagues facial transplants for as long as they remain a possibility for people. However, there is hope. In a statement from France's biomedical agency and National Hospital Service, "This graft shows for the first time…that re-transplantation is possible in the case of chronic rejection."

The transplants themselves take weeks before the doctors who performed the surgeries can deem them successful. Less than 40 transplants have ever been performed, and each case is so incredibly different from the last that doctors struggle to use one case as a comparison to another. If this particular secondary transplant proves successful, then it could give the other transplant recipients hope that further procedures could be an option if necessary.

Currently, Andy Sandness of the United States has to take a daily regimen of immunosuppressive drugs to prevent his body from rejecting the face entirely. Sandness was the first facial transplant for the Mayo Clinic. Recently, the Clinic created a video capturing the first time that Sandness met the widow of his face's donor.

"When you first do something like this, it's just a big excitement to finally meet each other just to — I mean, the buildup is just so much," Sandness said. "And then there's anxiety and pressure."

Lilly Ross, the widow of transplant donor Rudy Ross, said she was both nervous and excited to finally meet the man who now wears her late husband's face for the first time. 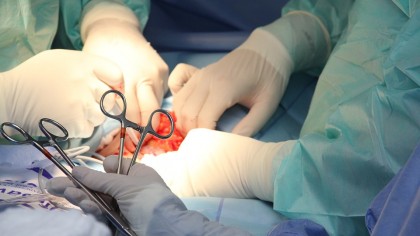 "It looks amazing," Ross said in an interview with Mayo Clinic. "You can see Rudy with the chin because you can't grow hair in the middle, too.

"And he's got the flushed cheeks, and he’s got a little mole on his nose. Otherwise, I see Andy. I don’t see much of Rudy in him."

Unfortunately, not every face transplant recipient has had the same sort of luck as Sandness. Since the original facial procedure, six people have died after the transplant. Isabelle Dinoire is one such casualty. She died in 2016 after a battle with cancer, but before she died, her face's rejection caused her to lose feeling and usage of her lips. The drugs she had to take were thought to cause the two cancers she developed. Dinoire originally received the transplants in 2005 after a dog mauled part of her face.

While they are incredibly risky, facial transplants are stretching the limits of medical techniques. They can also help doctor's address a wide array of issues, some of which include accidents, assaults, genetic disorders, and other life-threatening emergencies.