Bill Gates told students at Columbia which three sectors he would most like to get a job in.

Dropping out of college to start pursue a side project or start a company is definitely not an easy decision. There are many reasons why you might err on the side of caution and finish your education before beginning following your heart. Luckily for us, Bill Gates wasn’t someone that stuck with school, even if that school was Harvard. 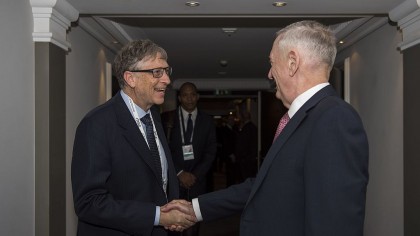 Gates, who is sometimes known as Harvard’s most famous dropout, left the prestigious college in 1975 to develop Windows and become one of the world’s richest men. Last week he spoke at another top ranking college, Columbia, with billionaire investor, Warren Buffett. More than a thousand students gathered to hear the pair speak on a range of topics. But what caught the crowd's attention was a question about what Gates might do if he dropped out of college today. Gates named three sectors he is interested in and that he believes are the areas that will make the biggest contribution to humankind in the near future.

The first sector mentioned, is unsurprising, Artificial Intelligence. Gates expressed his admiration for Artificial Intelligence, saying: The ability for artificial agents to read and understand material is going to be phenomenal. Anything connected with that would be an exciting lifetime career.” The Windows founder used the example of Google DeepMind's recent victory over the world’s top player of the game Go to illustrate just how far AI has come in a relatively short amount of time.

The second sector that Gates showed interest was the energy sector. Without getting too specific about what he meant, Gates talked about just how important the energy sector will be in the future. He described how there is still not a single system that has the ability to reliably provide enough energy for the world need while still being cheap and clean. Gates said the impact of energy innovation will be huge with the development of new technologies having the potential to affect everyone's lives.

Biotech industries will continue to innovate

Bill Gate’s final area of interest is Biotech. Gates said there was a growing need for innovation in the sector as humans fight against both deadly diseases like HIV and cancer as well as figuring out modern bodies and better understanding obesity and depression. One particular area Gates mentioned was the area of DNA vaccines. Gates commented, that despite President Donald Trump's comments linking vaccines and autism, he was confident that the U.S. would continue to invest heavily in vaccine research. Gates said: “I don’t think Trump will change the U.S. policy stance on vaccines. There may be a commission but the evidence [for the use of vaccines] is unequivocal.”

While these are the areas Gates might like to jump into if he was starting out all over again, he is definitely not an advocate for ditching studies. The Bill and Melinda Gates foundation places a huge emphasis on education and invests in scholarships both inside and outside the U.S. to help the underprivileged gain access to good schooling.