Dutch boat builder Port-Liner is launching a fleet of autonomous battery-powered barges in the Netherlands this summer.

An autonomous ship dubbed the “Tesla of the Canals” will ship goods between Antwerp, Amsterdam, and Rotterdam for the first time this summer. The boat built by Dutch company Port-Liner will cruise along the canals powered by a set of 6 meter long batteries charged using carbon-free energy. The Netherland’s largest energy providers, Eneco has the contract to provide the energy. Once in full operation, the massive ships will operate completely autonomously without crew on board. While the first of the ships are rolled out this summer, the crew will stay with the boats to oversee their maiden voyages.

The boats are set to have a significant impact on the air quality in the Netherlands. Each ship is capable of carrying 24 shipping containers weighing up to 425 tonnes. This extraordinary performance means the ships will be able to take some of the loads previously carried by freight trucks on roads. These diesel-powered trucks are big air pollution contributors, reducing their numbers even a little can have a measurable impact on air quality. 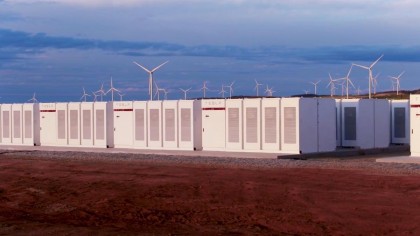 The first boats will take to the water in August when five of the 52-meter long, 6.7- meter wide barges enter the canals. Each ship can operate for 15 hours on a single battery charge.

The second round of ships is planned to be released later in the year. Port-Liner hopes to be able to get to a production rate of 500 boats built each year. The next round of boats will also be bigger in size, each one can offer a reduction of 18,000 tonnes per year of carbon dioxide emissions.

The electric barge project was made possible by grants and subsidies of €7 million from the European Union and the participating ports. Excitingly, the technology has the possibility to be retrofitted to existing barges which means these older diesel vessels can also become green.

Autonomous trucking on the rise

Autonomous transport looks set to be a booming industry in 2018. Late last year Tesla unveiled its autonomous Semi and other companies are also developing systems to reduce air pollution, make shipping more efficient and safer. One company making headway into the system is the Swedish transportation company Einride. The company's concept vehicle the T-Pod has a range of 124 miles and a 20kWh capacity. The company hopes the truck will eventually replace small heavy-duty fossil fuel reliant trucks on short trips. Once in full operation, Einride hopes the T-pod network will have the capacity to move up to 2,000,000 pallets of goods per year. “We’re now at a crucial time for not only the Einride business, but for the future of transport. Through technology, we have been able to create a system for the future, but it involves bravery and dedication from people the world over, to accept that change is also their responsibility and put the T-pod system into practice,” says Einride CEO Robert Falck.