The rare item, one of only 200 Apple-1 models ever made, is fully operational, having been restored to its original state in 2018.

Apple aficionados may remember three years ago when an Apple-1 computer in rather mint condition was sold in an auction for a whopping US$905,000. The exorbitant price was paid by a representative of the Henry Ford Museum from Michigan and the device was put on exhibition in 2016.

Now a newly discovered rare Apple-1 original may find a similar lucky fate. The desktop computer from the 70s has been put up for auction starting at an impressive US$300,000 by Boston-headquartered auction house RR Auction.

For those wondering why these devices considered ancient relics by today's standards fetch such substantial amounts, the answer lies in the fact that the Apple-1 is the firm's first ever product. The computers were designed and hand-built by Apple co-founder Steve Wozniak in the mid-1970s.

Only about 200 models were produced and it is estimated that only around 60 of these have survived till today. The particular Apple-1 that has now surfaced is described by the auction house as an "amazing, fully functional later production ‘Byte Shop’-style Apple-1 computer (also commonly known as the Apple I, or Apple Computer 1), complete with all components and accessories required for operation."


It is one of 50 models made by Apple co-founders Steve Jobs and Wozniak specifically for the Byte Shop in Mountain View, California. "The later production ‘Byte Shop’-style of this Apple-1 is indicated by discrete component dates which match other known Apple-1 boards of similar vintage, assembled and sold by Apple in the fall of 1976 and early 1977," explained RR Auction.

The auction house also revealed that unlike many of the boards of today's remaining Apple-1s, the board of the currently auctionable device has not had any modifications and features a clean and unused prototype area.

Fully operational and certified so

However, by far the most remarkable aspect of this item is that it is "fully operational." The device is reported to have been restored to its original state in June 2018 by famed Apple-1 expert Corey Cohen. 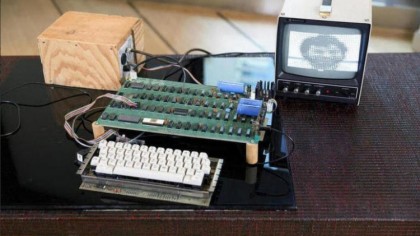 The auction house claims to have a video of the computer "running and functioning" that is available upon request as well as a "comprehensive, technical condition report prepared by Cohen." The expert, considered the go-to guy for all things Apple-1, has evaluated the auctioned device's current condition at 8.5 out of 10.

It is unlikely that any bidder would be looking to use the item, however, should they wish to, the computer is said to have functioned for about eight hours in a comprehensive test. The auction begins online today and the final bidding price, if history repeats itself, will likely make news headlines.

Will Aircraft Carriers Soon Be a Technology of the Past?