Many of us are wondering what the next generation of entertainment will look like. Virtual reality, augmented reality and other new technologies are poised to engulf the entertainment world and a new test video called "Lost Droids" offers a glimpse into this new world.

The Magic Leap team recently got together with ILMxLAB and created this mind-bending mixed reality test video that mixes the droids from Star Wars with light-projected virtual images. The effect is pretty unbelievable.

The last time you saw something like this video was probably in a science fiction film. Little did you know it would become a reality later on.

Magic Leap is a pretty secretive startup whose technology could potentially kill all regular movie screens. And who can blame them? They're creating brain-tricking pure magic for our visual senses. According to Pocket-lint.com, Magic Leap's tech is called

"Dynamic Digitised Lightfield Signal, or Digital Lightfield for short. This, essentially, projects images directly into the eye so it hits the retina. Traditional projectors would fire the light at a surface which bounces it back into the eye. By going directly it is able to "trick" the brain into thinking it's real." -Pocket-lint.com

Speaking of unbelievable, have you seen Magic Leap's hologram whale video? Get ready to have your mind blown:

And Lucasfilm is partnering with Industrial Light and Magic (ILM) to create the xLAB, where their mission is to bring immersive entertainment to the masses. Their goal is to bring "wonder to the senses". No one knows for sure when their mixed reality entertainment will be unleashed to the world, but it appears that they have some of the technological hurdles ironed out, as evidenced by the test video.

I'd be willing to bet that in 10 years, our entertainment world will look very different. We will probably view regular movie screens in the same way we view VHS video players. It's going to be a crazy world, and many of us won't know what's real and what's not. 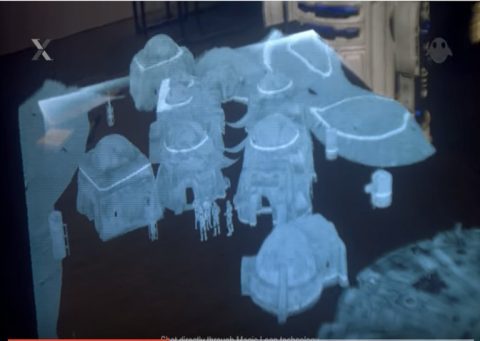