The European Space Agency recently performed a successful round of tests on an air-breathing thruster.

With the number of space missions—both manned and unmanned—accelerating without an end in sight, the need for effective and intelligent approaches to space rocket technology has become more important than ever. 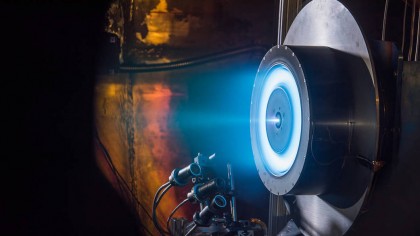 Leading the way in the past decade has been efforts to refine the technology behind ion thrusters, the preferred method of propulsion for missions due to their overall more efficient use of both electrical power and fuel.

The latest development in this area comes with the recent round of testing carried out by the European Space Agency (ESA) on an air-breathing electrical thruster (the category name alone deserves its own credit).

Scientists involved in the project have reported not only a successful round of testing, but express enthusiasm about the future applications of the air-breathing thruster.

ESA has identified the Gravity field and steady-state Ocean Circulation Explorer (GOCE), an Earth explorer mission which was first launched in 2009, as an ideal candidate for the thruster. The advantage cited by the team for thrusters of this kind is their ability to collect air molecules existing on both Earth and Mars which could be used as a propellant, and at the same time dramatically reduce the amounts of air resistance. In other words, they can help fly longer, and at lower levels during missions:

“This project began with a novel design to scoop up air molecules as propellant from the top of Earth’s atmosphere at around 200 km altitude with a typical speed of 7.8 km/s.” The team reported that due to the added 40kg of weight from the xenon used in the existing thruster that GOCE had only been able to fly as low as 250 km.

The test was conducted inside of a simulator belonging to Italy-based SITAEL, with the goal being to measure the levels of compressed air generated by the thruster, and more specifically, the effects of gradually introducing air molecules to the thruster.

“When the xenon-based blue color of the engine plume changed to purple, we knew we’d succeeded.”

By all indications, this thruster seems to have laid the foundation for countless future space missions:

“This result means air-breathing electric propulsion is no longer simply a theory but a tangible, working concept, ready to be developed, to serve one day as the basis of a new class of missions.”

With the end of the manned space flight era ushered in by NASA in 2010 with the end of its space shuttle program, missions like GOCE and others which appeared around the same time are being directed towards the ambitious task of securing commercial space travel, pushing the boundaries of man’s interactions with space to new levels.