German researchers developed a sensor-laden chip that can be mass-produced at a low cost to sniff out dangerous odors or chemicals in an area.

The sense of smell is one of the most important biological indicators humans (and most other animals) have to keep us safe. Some smells are easy to identify like peanut butter or coffee or gasoline. Others like potentially hazardous smoking wires or bad food can be a bit harder to pinpoint. A new, low-cost device could help popular gadgets become equipped to sniff out danger for its users.

Germany's Karlsruhe Institute of Technology developed an electronic nose just a few centimeters in size with a unique sensor chip. Multiple sensors have an array of tin oxide nanowires. Those nanowires have high electrical resistance. When in use, the resistance is lowered via ultraviolet LED. Odor molecules from the air settle on the wiring, and the resistance further decreases. The decreases in resistance can tell the team exactly what the odor's pattern is and compare it with a growing database of known odors.

“We use the biological nose as a model,” said Dr. Martin Sommer, who coordinates the "smelldect project" at KIT’s Institute of Microstructure Technology. “In our electronic nose, nanofibers react to complex gas mixtures – i.e. scents – and also generate signal patterns, on the basis of which the sensor identifies the scents.”

“When the sensor perceives a smell, the resistance decreases further. If a smell disappears, the electrical resistance increases again to the initial level and the “nose” is ready for other measurements,” Sommer said.

While the database is extensive and continuing to grow, Sommer and his team realized that even the same odor source (i.e. rotten foods or sour milk) can produce different variations of close odors. There are also situational differences between smells, as Sommer explained.

“The difficulty consists in the fact that a scent does not always remain the same. For instance, the smell of a rose in the sun differs from that of a rose in rain,” the physicist said. “Currently, we are training the electronic nose for specific uses which can be chosen universally however.”

The applications for such a unique piece of technology go farther than most people realize, Sommer said. 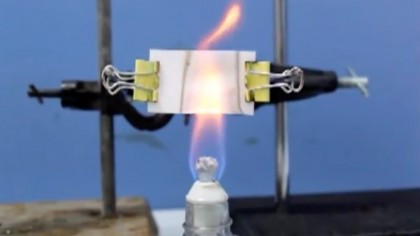 “In the future, the electronic nose might be incorporated into all electric devices in order to prevent cable fires. Or it can be used in smartphones. When going shopping, everybody might be accompanied by his/her own highly sensitive electronic nose,” Sommer said.

With the electronic nose, savvy shoppers might finally be able to pick out the perfect produce. The nose could also help in emergency situations, and that's the next big step in the development of the sensor. The university is collaborating with industry leaders JVI Elektronik and FireEater to create a combustion gas-sniffing fire alarm.

Regardless of its specific uses, the team wants the sensor available at a low cost to the mass market.

The Smallest-Ever Injectable Chip Hints at a New Cybernetic Medicine