Galactic Winds May Explain the Evolution of Galaxies

Researchers have found exciting new clues about the formation and evolution of galaxies thanks to new data from a galaxy ten times as energetic as our own.

The Galactic Wind of the Cigar Galaxy

Just as pressure systems here on Earth produce atmospheric winds and the intensity of the sun's corona produces a solar wind of charged particles in the form of plasma, galactic activity in the form of star formation also produces a wind of gas and dust that blows out from its center.

SEE ALSO: ASTRONOMERS FIND A GALAXY WITHOUT DARK MATTER FOR THE FIRST TIME

In the case of the Cigar galaxy, technically known as M82, its incredible galactic activity is a source of tremendous energy. While normal galaxies like the Milky Way produce a couple of dozen new stars every year, M82 produces ten times as many stars in that same period. While our galaxy quietly simmers with activity, M82 is at a rapid boil.

This is what researchers were hoping to study with the Stratospheric Observatory for Infrared Astronomy (SOFIA). It has long been suspected that the galactic winds carry the magnetic field of the galaxy with it as it is blown outwards from the center, but this phenomenon has never been directly observed.

What they found with SOFIA is that this is indeed the case, but that that wasn’t all. They were able to identify that the galactic wind from M82 carries an incredible amount of dust and gases into intergalactic space—the equivalent of 50 to 60 million solar masses worth.

"The space between galaxies is not empty," said Enrique Lopez-Rodriguez, a member of the SOFIA team and scientist with the Universities Space Research Association. "It contains gas and dust - which are the seed materials for stars and galaxies. Now, we have a better understanding of how this matter escaped from inside galaxies over time."

Carrying the Magnetic Field With The Wind

Using the airborne SOFIA observatory—a converted Boeing 747SP jetliner modified to carry a 106-inch diameter telescope, among other instruments—the SOFIA team turned their equipment towards M82 and studied it using the far-infrared light it radiated.

To do this, they used the High-resolution Airborne Wideband Camera-Plus (HAWC+), which uses this light to observe the grains of celestial dust that align themselves along the lines of a magnetic field. This allows the researchers to reach conclusions about the shape and size of magnetic fields that are invisible otherwise.

"Studying intergalactic magnetic fields - and learning how they evolve - is key to understanding how galaxies evolved over the history of the universe," said University of Minnesota, Minneapolis, professor emeritus and lead researcher for the study, Terry Jones. "With SOFIA's HAWC+ instrument, we now have a new perspective on these magnetic fields." 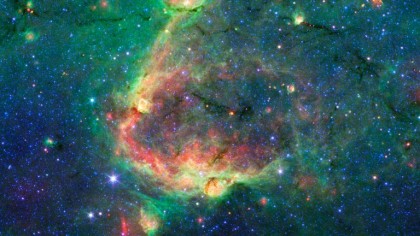 "One of the main objectives of this research was to evaluate how efficiently the galactic wind can drag along the magnetic field," Lopez-Rodriguez said. "We did not expect to find the magnetic field to be aligned with the wind over such a large area."

The researchers indicate that if both the material ejection and magnetic field phenomena occurred during the early formation of the universe, they would have fundamentally affected the evolution of the first galaxies.

A Brief History and Evolution of Electric Cars

Scientists May Have Discovered the Ancestor of Dinosaurs in Madagascar