Are the Game of Thrones Dragons the Nukes of Westeros?

Could the dragons in the Game of Thrones be likened to the real world's nuclear deterrent? Let's find out.

Every Game of Thrones fan has "chomping at the bit" to see Game of Thrones dragons unleashed on the armies of Westeros. In the "Spoils of War" episode we got a taste of what is to come.

But with great power comes great responsibility, as they say. While they can turn the tide of a battle, is the destruction they leave in their wake worth it?

In this sense, they can be likened to humanity's nuclear deterrent.

Warning! From here on out the article will contain spoilers so if you haven't seen any of Season 7, you might want to stop reading.

You have been warned.

R. R. Martin has made no secret of the deep meaning of dragons in the series. He has specifically referred to them as the "nuclear deterrent" of the GoT.

“Dragons are the nuclear deterrent, and only [Daenerys Targaryen, one of the series’ heroines] has them, which in some ways makes her the most powerful person in the world," Martin told the Vulture in 2011.

George's remarks are also supported by Timothy Westmyer, formerly of George Washington University. He argued in the Bulletin of the Atomic Scientists that the Game of Thrones dragons is "living, fire-breathing metaphors for nuclear weapons.”

Just like nuclear weapons, wielding them in battle comes with vast moral implications.

The "Spoils of War" episode was a great example. The devastation caused by the Game of Thrones dragons was total and horrifying. The aftermath of the battlefield certainly conjures up images of Pompeii or perhaps even Hiroshima.

This is where a direct comparison with our current nuclear deterrent is quite striking. With such awesome power at her disposal, The Mother of Dragons has essential moral and ethical questions to answer before unleashing them.

This has parallels with our modern world, especially when considering the use of nuclear weapons.

Jon Snow summed up her situation very succinctly before she left to immolate the Lannister baggage train.

He reminded her that she has amassed such a large army and support through her use of compassion, not strength. If she were to use her dragons to "melt castles and burn cities" she'd be no different to her ancestor tyrants before her and quickly lose the support of the people.

In effect, she would undermine everything she says she stands for.

But of course, as we have seen, she is not averse to using them when necessary. The terror aspect of her dragons will certainly give Jaime and Cersei a serious cause for concern.

A major divergence from our modern MAD nuclear deterrent is that it can only work if all parties have the same destructive potential. Clearly, in Westeros, only Daenerys and now sadly, the Night King, possess this power.

But, there is another aspect to this.

All parties need to have a fundamental disgust at the appalling cost of their use. Clearly, the Night King cares little for the living.

Not only does this add a very new dimension to the entire balance of power in Westeros, but it also throws in some interesting moral choices for Daenerys.

But since the white walkers are already dead, she might get a free pass.

We are yet to see what powers the Night King's undead dragon will possess.

Will it be able to breathe fire at all? Will it be vulnerable to Dragon Glass?

Both the Game of Thrones dragons and nuclear weapons provide to the owner a unique destructive potential.

In the July/August Atlantic cover story, Mark Bowden wrote of North Korea "there are no good options" when considering the use of nukes. Daenerys, in her own way, could be likened to the United States. 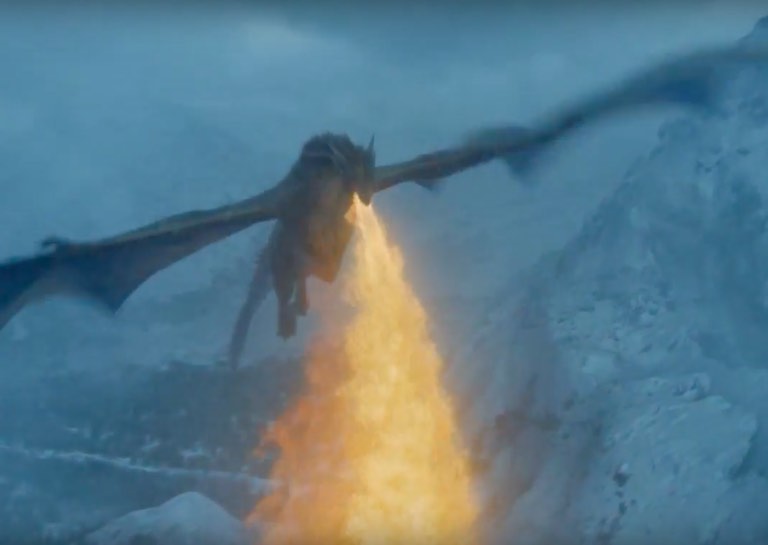 She quite literally has the power to destroy everything and anything in her path. Since her ultimate objective is peace and prosperity, this would not be a good idea.

George R. R. Martin, in 2011, said that although Daenerys is the only person, until now, to have the "nuclear option" at her disposal, it doesn't make her omnipotent.

Power is more subtle than that,” George explained. “You can have the power to destroy, but it doesn’t give you the power to reform, or improve, or build.”

General Curtis Lemay, the former head of the US Strategic Air Command once said of unleashing nukes on the USSR:-

"between sunset tonight and sunrise tomorrow morning, the Soviet Union would likely cease to be a major military power or even a major nation.”

Daenerys' family motto is in fact "Fire and Blood," which seems pretty fitting after seeing her Dragons in action.

But, her dragon arsenal is far from invulnerable. As we saw in "The Dragon and the Wolf", the Night King was able to kill one with an incredibly impressive ice spear throw.

Drogon, came close to being felled by Bronn during the assault on the baggage train as well.

Given the organic nature of her "nuclear deterrent," the comparison between nukes and dragons begins to break down.

But it could be argued that nuclear weapon silos could, in theory, be pre-emptively destroyed or warhead carrying subs knocked out. But given enough time, replacements can be built.

However, her dragons are the only ones remaining, as far as we are aware.

Although the Game of Thrones dragons are incredibly awesome weapons, they should be used sparingly. After all, what good is a total victory when the land you conquer is left a smoldering ruin?

Sure, she could burn all her foes to a crisp and win the war. But then, how would she win the peace?

Employing them with reckless abandon could also leave her exposed and isolated from her close allies and friends. A tricky choice indeed.