In early 2013 we reported about the PVAC Design (Personal Vacuum Assisted Climber) by Ascending Aggies that defeated 32 other designs in the Air Force Laboratory Design Challenge competition in 2012. It is a wearable device that allows a human to climb vertical walls. For that purpose PVAC has suction pads and a vacuum pump. This is one of the two general directions in which vertical climbing devices are developed. The other one uses the specific structure of a lizard foot as an example.

Gekkota is an infraorder that consists of non-blinking, small sized reptiles with the ability to climb vertically very smooth surfaces. Teflon is the only known material that hinders, but doesn’t fully remove the gecko ability of surface adhesion.
So, where is the magic? Each lower surface of a gecko toe has thousands of tiny, spatula-shaped hairs called setae, arranged into rectangular plate-like structures called lamellae. The gecko ability is explained with the van der Waals force that occurs. Roughly explained, this is a force of chemical or electrostatic attraction between the molecules of two materials that touch each other. 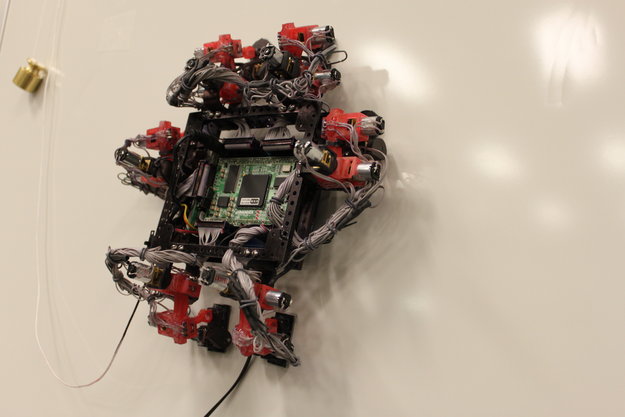 Now we see a robotic twin of the gecko lizard developed by a group of engineers at the Simon Fraser University of Canada. Space tests made by ESA (European Space Agency) proved that the robot could work effectively even at space condition. Tests were held on Earth, at ESTEC (European Space and Technology Center) in Netherlands. The European laboratory recreated almost all space conditions except the lack of gravity – vacuum and very low temperatures, and the artificial gecko operated successfully through all that. It will not be a surprise if Abigaille, as the robot was called, is launched to the International Space Station or to any other orbiting around the Earth object. The dry adhesive technology (or maybe the gecko natural technology would be better to say?) has big potential for “space walking” compared to other variants. For example, magnetic feet may affect the electronic equipment and simply may not work on composite surface (a material often used for spacecraft hull coverage).

Although using the gecko climbing technique, Abigaille looks more like a giant bug with its 6 legs. Each leg has freedom of 4 degrees which allows the robot to easily switch from vertical to horizontal position. However, there was an ancestor that looked closer to the lizard by having 4 legs. It weighed 240 grams and had 100-200 nanometer thick micro-fiber thread. The thread copies the function of the setae on the gecko toe – participates in the generation of van der Waals force. The original lizard setae is 100 times slimmer than the artificial one but the robot walked successfully on a vertical surface, so obviously the thickness of the artificial toe hair was sufficient.
“This approach is an example of ‘biomimicry’, taking engineering solutions from the natural world,” explained Michael Henrey of Simon Fraser University.
“We’ve borrowed techniques from the microelectronics industry to make our own footpad terminators,” Henrey also said. “Technical limitations mean these are around 100 times larger than a gecko’s hairs, but they are sufficient to support our robot’s weight.”