In recent years, Gecko's have been headlining major news stories for their remarkable biotechnological capabilities. Researchers have been mimicking geckos' unparalleled grippy feet that enable them to scale almost any surface at almost any angle. Now, Stanford engineers are using gecko tech to solve another human problem, space trash.

Over 500,000 Pieces of Human-made Debris Remain in Space

Ever since Sputnik I, the first artificial satellite launched into orbit in 1957, there has been a steady influx of orbital satellites - many of which have since been abandoned. Currently, more than 500,000 pieces of man-made space debris remain in orbit around Earth. 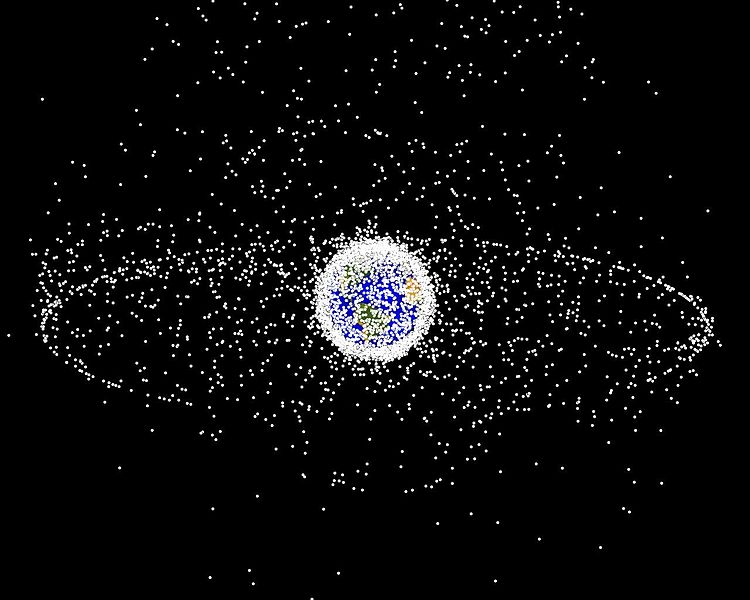 In the harsh conditions of space, every satellite's lifespan is limited. Satellites only remain functional for so long before their parts grow old and wear out. Eventually, all artificial satellites will die and will become part of the ever increasing number of space debris encircling Earth. Currently, more than 95% of the satellites remaining in orbit are no longer functional.

Space debris poses a threat to other satellites and instrumentation in orbit around Earth. Traveling at thousands of kilometers an hour, a strike from a piece of rogue space debris could destroy another satellite or potentially kill an astronaut aboard a space station. Each year, many more satellites are sent up into space, cluttering passageways. Stanford engineers want to alleviate the situation before it cascades into a major problem. Their proposed solution is to use gecko-grippers to extract space debris.

Tidying up space debris poses a unique problem, one that traditional technologies cannot accomplish. In space, the conditions are harsh. There is no air, and it is insanely cold.

Typical adhesives like tape cannot withstand the extreme temperature changes. The heat causes the chemicals to physically change, and the cold makes everything brittle.

For obvious reasons, suction cups are not a viable solution either. With no atmosphere to create a vacuum, suction is impossible.

Therefore, as researchers from Stanford University and NASA’s Jet Propulsion Laboratory (JPL) see it, there is only one clear solution: gecko grippers.

“What we’ve developed is a gripper that uses gecko-inspired adhesives,” says Mark Cutkosky, professor of mechanical engineering and senior author of the paper. “It’s an outgrowth of work we started about 10 years ago on climbing robots that used adhesives inspired by how geckos stick to walls.”

Geckos get their grip from microscopic hairs that split off into even smaller segments at the tip. The ends split off into billions of contact points. As they near a surface, the tips get a grip from what is known as Van der Waals forces.

"This force comes from fluctuations in charge distributions between neighboring molecules, which need not be polar; their charge fluctuations naturally fall into sync, creating an attractive force." 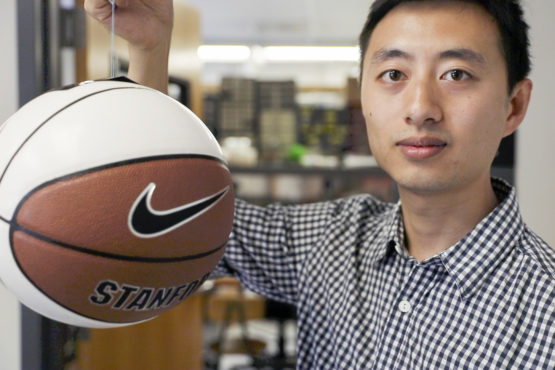 Stanford researchers make use of this effect by implementing millions of microscopic flaps along a flexible sheet. When in contact and under a load, the flaps bend, creating the contact points and allowing the material to latch onto an object.

“There are many missions that would benefit from this, like rendezvous and docking and orbital debris mitigation,” says Aaron Parness, MS ’06, PhD ’10, group leader of the Extreme Environment Robotics Group at JPL. “We could also eventually develop a climbing robot assistant that could crawl around on the spacecraft, doing repairs, filming and checking for defects.”

Getting a Grip with Geckos

The micro-flaps used to comprise the contact points are many times larger than the hairs on a gecko's foot.

"The flaps of the adhesive are about 40 micrometers across while a gecko’s are about 200 nanometers – but the gecko-inspired adhesive works in much the same way," reports Stanford University.

The adhesive's flexible properties enable it to conform to an uneven object without impeding on the force of its grip. The flexibility is imperative for a robot destined to collect many satellites made of many materials with many shapes.

“Imagining that you are trying to grasp a floating object, you want to conform to that object while being as flexible as possible, so that you don’t push that object away,” explains Hao Jiang, a graduate student in the Cutkosky lab and lead author of the paper. “After grasping, you want your manipulation to be very stiff, very precise, so that you don’t feel delays or slack between your arm and your object.”

On Earth, the conditions are incredibly different in comparison to the extreme conditions of space. Nevertheless, the Stanford researchers behind the project devised ingenuitive experiments to test out their robot on Earth.

The robotic grippers were tested in a vacuum chamber to prove its grippy capabilities in near vacuum conditions. The results were largely a great success, leading the researchers to take the next steps into testing the robot's capabilities in zero gravity situations.

The team took the robot inside a specially modified plane that flew to a high altitude. Then, by controlling the rate of descent and matching its acceleration to gravity, everything inside the plane became "weightless".

“[In the plane] we had one robot chase the other, catch it and then pull it back toward where we wanted it to go,” says Hawkes. “I think that was definitely an eye-opener, to see how a relatively small patch of our adhesive could pull around a 300 kilogram robot.”

NASA, interested in the technology, took several small pieces of the adhesive up to the ISS to test the material in an environment similar to the extreme conditions expected far out in Earth's orbit. Similar to the Earth bound trials, NASA concluded the grippers work extraordinarily well.

Perhaps sometimes soon, NASA and other agencies may begin to clean up the remains of the satellite cemetery encircling Earth that continues to grows a little larger each year.

Where Satellites go to Die

When it comes to dismantling a defunct satellite, engineers typically have one of two choices.

For satellites in low orbit, fuel reserves are used to slow the satellite down, forcing it to succumb to the Earth's gravitational pull. Eventually, it will fall out of orbit. The satellite reenters the Earth's atmosphere where it burns up. As the satellite falls, heat generated from the friction of the air quickly incinerates the metal and other materials before it plummets back down.

Fun Fact: Objects too large to completely incinerate on the journey back down are guided into an area known as the Spacecraft Cemetery. The location is about as far as you can get from any civilization - smack dab in the center of the South Pacific Ocean. Fragments that do not completely incinerate crash and come to rest in a watery grave, far from the reaches of any human life. 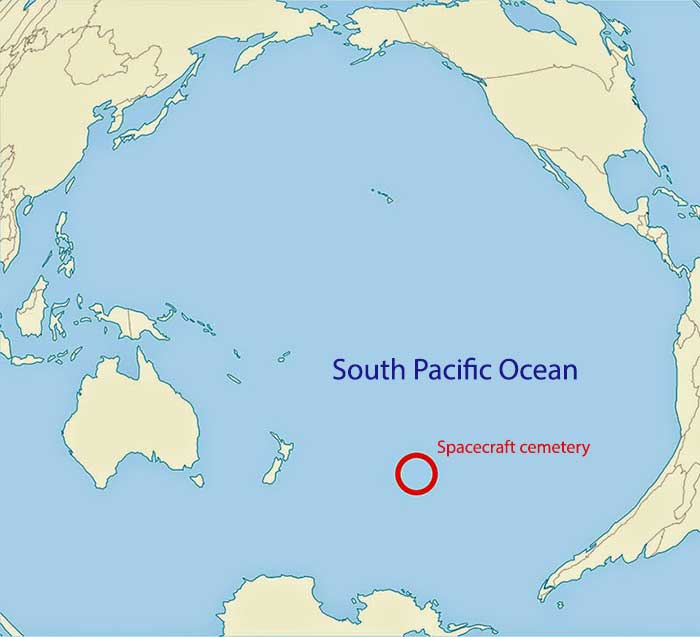 Unfortunately, sufficiently slowing the orbit of a satellite requires an extensive amount of fuel - fuel that may no longer exist in the reserve of old and spent satellites. Sometimes, it is easier to blast a satellite farther away than it is to send it back to Earth.

Satellites in high-orbit are often sent to the graveyard orbit. Using what little fuel remains, engineers can blast the satellite to an orbit 300 km above any active ones remaining below. These satellites remain in orbit forever, nearly 40,000 km above the surface of Earth.

"So is that the end of it for these far-away satellites? As far as you and I are concerned it is! However, some of these satellites will remain in orbit for a very, very long time. Perhaps someday in the future, humans may need to send “space garbage trucks” to clean these up. But for now, at least, they will be out of the way," NASA comments on their website.

With hundreds of thousands of satellites remaining in orbit, scientists are now working on "space garbage trucks" to clean up the mess left behind in space. Finally, there is a third and more ethical option to dispose of rogue satellites: extraction and recycling.

Although it is still in an early prototype phase, Stanford's new gecko-inspired grippers may finally help researchers get a grip on Earth's space debris problem.

SEE ALSO: These Light-Actuated Grippers are Inspired by Geckos