English rocks hold a clue as to how not only the English Isles formed but also how England is more connected with continental Europe.

The British Isles might have been formed by the collision of not two but three continental land masses, according to a new study.

Researchers with the University of Plymouth released a report theorizing that the land mass of Armorica was involved in creating the British mainland.

This challenges what scientists have previously believed for centuries. The understanding was that England, Wales, and Scotland were all created when the land mass of Avalonia collided with Laurentia some 400 million years ago.

The University of Plymouth's research can be found in a recent edition of Nature Communications.

Rather than assume common understandings were the complete story, the geologists looked for clues in the minerals of popular rock features.

“This is a completely new way of thinking about how Britain was formed."

“This is a completely new way of thinking about how Britain was formed," said professor Arjan Dijkstra. "It has always been presumed that the border of Avalonia and Armorica was beneath what would seem to be the natural boundary of the English Channel. But our findings suggest that although there is no physical line on the surface, there is a clear geological boundary which separates Cornwall and south Devon from the rest of the UK.”

The various clues found by the Plymouth research team establishes a deeper geological connection between the UK and France. Consistencies in rocks between these areas and in France confirmed to the team that the bond not only existed but would've been stronger than anyone previously thought.

How the researchers made the discovery

Dijkstra and masters student Callum Hatch traveled to 22 unique sites in both Devon and Cornwall that would've been exposed after certain geological events like a volcano.

While one might not immediately associate volcanic activity with the lush and peaceful countrysides throughout the UK, volcanoes are responsible for most of the UK's geological makeup. Volcanic activity pulled magma from over 100 km deep up to Earth's surface some 300 million years ago.

And the researchers knew it was those locations that held their best chances for clues.

Hatch and Dijkstra took rock samples from each site to run through X-ray fluorescence (XRF) spectrometry.

After getting initial readings from the spectrometer, the researchers dissolved the rock samples in acid. This let the team get a better understanding of the rock's isotopic analysis. 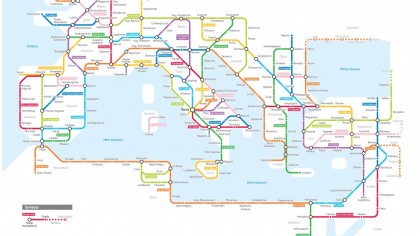 The team looked for trace amounts of strontium and neodymium to dissect the rocks' histories.

Once the team made their analysis, they compared it to previous research. The results show there's a clear boundary going from the Exe estuary to Camelford in the west. It also further explains the added connections between the UK and France.

“We always knew that around 10,000 years ago you would have been able to walk from England to France,” Dijkstra added. “But our findings show that millions of years before that, the bonds between the two countries would have been even stronger. It explains the immense mineral wealth of South West England, which had previously been something of a mystery, and provides a fascinating new insight into the geological history of the UK.”

A Winning Formula-1 Racecar Could Be Yours. For $2 Million