Last year (2016), in the Interesting Engineering article entitled “Revolution in the Pythagoras’ Theorem?”, Dr. Luis Teia presented the proof of the Pythagoras’ theorem in 3D. This year, Teia explains in his recent (Feb 2017) peer reviewed paper, entitled Fermat’s Theorem – a Geometrical View published in the Journal of Mathematics Research, how this 3D understanding of the Pythagoras’ Theorem provided the geometrical foundation to prove Fermat’s Last Theorem. Fermat’s Last Theorem, also known as Fermat’s conjecture, is more than just about triples, it is about the fundamental nature of an integer number, and it’s mathematical and geometrical meaning. It raises the philosophical question: What is a unit? In the language of mathematics, a unit is defined by the number 1. In the language of geometry, a unit is defined by an element of side length one. A perspective of a problem depends on the language we use to observe it, and a change in perspective is often all it takes to see the solution.

What is Fermat’s Theorem? 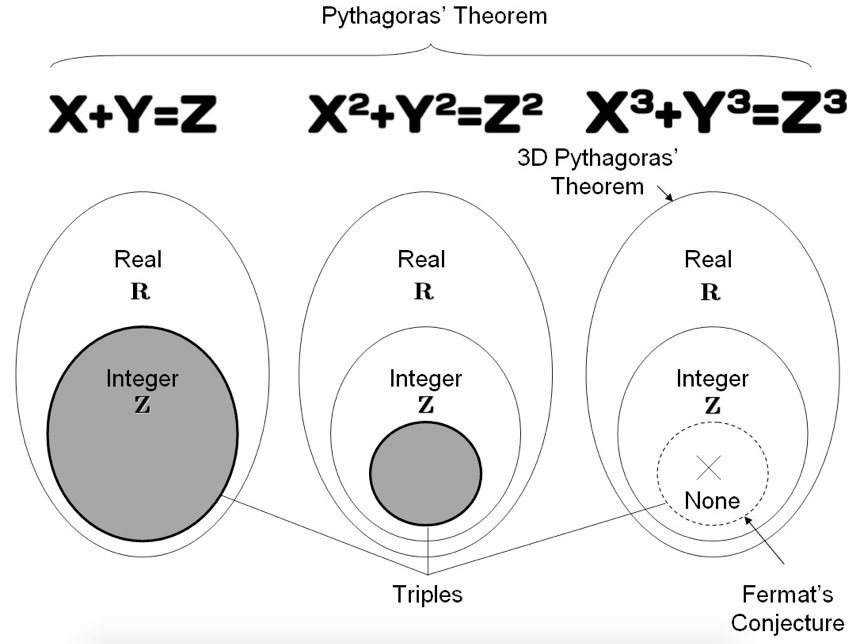 The hypothesis of this new proof is that a triple only exists, if all integer elements within that triple also exist [e.g., 1, 2, 3 for the 1D triple (1,2,3), and 3, 4, 5 for the 2D triple (3,4,5)]. In turn, an integer element only exits if it obeys two conditions: it satisfies the Pythagoras’ theorem of the respective dimension (Condition 1), and it can be completely successfully split into multiple unit scalars (Condition 2). One can therefore hypothesize that integer elements do not exist if either Condition 1 or 2 is not satisfied. By consequence, if the integer does not exist, then the associated triples also do not exist.

The geometrical definition of integers in 1D, 2D and not in 3D [Image Source: ]

The geometrical solution to Fermat’s riddle doesn’t come from the notion of triples, but rather from the notion of integers. If integers don’t exist, then neither can triples. Alas, the centennial elusiveness of the proof results from the repetitive usage of available “tools”, rather than inventing new tools (the 3D Pythagoras’ theorem) to find the solution. The simplicity of this geometrical proof (founded on the absence of integers within the domain of the Pythagoras’ theorem for dimensions above 2D) makes us wonder whether this is not the famous “elegant solution” that Fermat spoke of, of which he left no other records except a written note saying:

“I have discovered a truly remarkable proof of this theorem, which this margin is too small to contain.”

As for Dr. Luis Teia, his next challenge will be to explain the geometrical meaning of the formula on partitions from the mathematician Srinivasa Ramanujan.