The film centers around a future world after climate change has reared its ugly head, somehow they've found a way to control the weather with satellites. Go home Geostorm, you're drunk.

It’s pretty standard for films to go overboard with future technology, some get it spot on like the self-driving cars in Total Recall or the Skype-like video phone in 2001: A Space Odyssey. But others land far from the target, like in Escape from LA where Los Angeles was an autonomous land of criminals in 2013. Not so much.

The latest film to get it all wrong is Geostorm, a movie about a global weather apocalypse and the weather control technology shown in the film has scientists putting forehead to palm all over.

"Thanks to a system of satellites, we can control our weather," states a character in Geostorm. Not possible.

Geostorm addresses the issue of global warming and explores what would happen if humanity failed to prevent it. However, in the film scientists have built a network of satellites called Dutch Boy that can neutralize natural disasters with one zap.

It’s all going swimmingly until something causes a malfunction in the system and chaos ensues. A Geostorm, the worst hybrid of storm the world has ever seen forms and starts decimating the planet’s cities with tornadoes, tsunamis, ice age winters and blazing infernos.

Despite the onslaught, the film’s scientists seem intent to try and figure out the glitch. It should be noted that using a large-scale technical intervention isn’t that farfetched. The concept is called geoengineering and has been established for decades. Though considered a fringe science, since the topic of climate change first arose, the practice has become more prevalent.

“I think up until recently, geoengineering was considered a fringe topic, [something] people on the edges of mainstream science talked about,” Ken Caldeira, a climate scientist at the Carnegie Institute for Science who has been involved with geoengineering conversations since the early 2000s, told Gizmodo. “Now in terms of science, it’s been normalized.”
Geostorm doesn’t quite do it any favors because their form of geoengineering involving a laser that can zap weather out the sky is frankly implausible.

“This idea that you can do something in one place and most of the effects can stay localized to that place is a misunderstanding of how the climate system works,” Caldeira continued to Gizmodo. “It’s much more plausible that you would just get fried by an orbiting laser weapon,” he said.
In real life, geoengineering concepts range from dumping iron into the sea to stimulate the growth of carbon-eating phytoplankton to injecting tiny particles into Earth’s stratosphere to reflect incoming sunlight.

In fact, Harvard scientists are planning on doing just that. Researchers from the Harvard John A. Paulson School of Engineering and Applied Sciences (SEAS) have identified an aerosol for solar geoengineering that may be able to cool the planet while simultaneously repairing ozone damage. 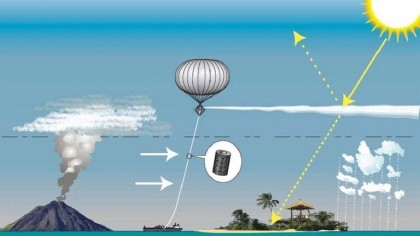 They basically found an antacid for the stratosphere.

The researchers are clear that even if they reduce the risks of global warming to reasonable levels, geoengineering is not a cure for climate change. Geostorm’s Dutch Boy would never work; in fact, it would do more damage.

“Geoengineering is like taking painkillers,” said Frank Keutsch, the Stonington Professor of Engineering and Atmospheric Science at SEAS and professor of chemistry and chemical biology, a co-author of the paper.

“When things are really bad, painkillers can help but they don’t address the cause of a disease, and they may cause more harm than good. We don’t know the effects of geoengineering, but that is why we’re doing this research.”