A South Korea based team of researchers develop a ground-breaking aqueous energy storage device that promises growth of a number of potential applications.

A team of researchers at the Daejon, South Korean-based Korean Advanced Institute of Science and Technology (KAIST) have invented an energy storage device that is ready to work after less than a 30-second charge. Professor Jeung Ku Kang led a team of students in KAIST’s Graduate School of Energy, Environment, Water, and Sustainability.

The work of Professor Kang and his team is ground-breaking for two reasons:

• It is the first time that the charging speed and high energy density limitations typically associated with aqueous hybrid capacitors have been effectively solved.

• The device was able to achieve the performance objectives set and still maintain a high level of stability.

To achieve this dual aim, the team essentially developed a new cathode-anode configuration by utilizing a range of different materials and structures. Metal oxide nanomaterials and fiber-like polymer chains were connected on the surface of graphene, which was chosen for its flexibility. With this combination, the team was able to solve the problem of incompatible electrode electrical properties, which exists in some storage devices of this kind that have been developed in the past.

The details of their work were shared in an article, titled “Synthesis of Pseudocapacitive Polymer Chain Anode and Subnanoscale Metal Oxide Cathode for Aqueous Hybrid Capacitors Enabling High Energy and Power Densities along with Long Cycle Life,” which was published in the Advanced Energy Materials Journal on January 15th, 2018. The team also made a short video explaining their landmark research performed with aqueous hybrid capacitors:

Professor Kang spoke enthusiastically about the future applications of the device: “This eco-friendly technology can be easily manufactured and is highly applicable. In particular, its high capacity and high stability, compared to existing technologies, could contribute to the commercialization of aqueous capacitors. The device can be rapidly charged using a low-power charging system, and thus can be applied to the portable electronic device.”

With the appearance of portable devices — with no end in sight to their production — the issue of electrical energy storage (EES) has moved to the forefront, overlapping in many cases with the larger debate surrounding sustainable energy objectives. The body of research has been growing steadily in the last five years or so. 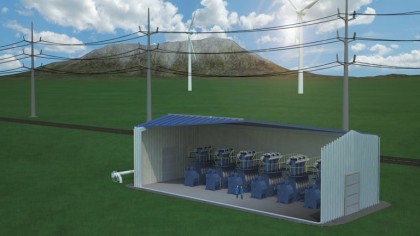 In a study, titled “Multidimensional materials and device architectures for future hybrid energy storage” from Nature journal, the co-authors wrote about the “limitations of current EES devices expose fundamental gaps in our understanding of atomic - and molecular - level processes that govern their operation, performance and failure”, adding that there is a need for “the development of a new generation of sustainable, affordable and safe EES technologies that approach the theoretical limit for electrochemical storage and deliver electrical energy rapidly and efficiently”.

Aqueous electrochemical energy storage devices are also being developed and researched in greater numbers due to the growing perception that they offer a more environmentally-friendly alternative to traditional lithium-ion batteries. The industry is sure to respond to this energy production innovation led by the team at KAIST.