High-power electric car charging network Ionity has revealed a map of 400 planned stations across Europe. They are designed to initially have a charging capacity of 150kW.

Ionity, the electric car charging network that carmakers BMW, Mercedes, Ford, Volkswagen, and Porsche are jointly working on, has issued a map of their planned stations.

The joint venture is planning a total 400 stations across Europe by 2020 with a maximum capacity of up to 350 kW. Work has started on the first 20 stations in 2017 and they plan to complete a total of 100 stations this year.

The stations will be located on major roads in Germany, Norway, and Austria, at intervals of 120 kilometers, through partnerships with “Tank & Rast”, “Circle K” and “OMV”.

The stations will enable several drivers of different car brands to charge their vehicles at the same time. Each charging point will use the existing European standard, the Combined Charging System, to reduce charging times compared to existing systems.

This high-power charging (HPC) network for electric vehicles across Europe is believed by many to be the most important electric vehicle charging infrastructure effort since Tesla’s Supercharger network.

The joint-venture, one of whose goals is to make long-distance journeys on electric vehicles easier, is based in Munich, Germany and is led by Chief Executive Officer Michael Hajesch and Chief Operating Officer Marcus Groll. The team is set to be 50 people by the start of 2018.

Audi has shared the first image of the map of the stations at a conference in Oslo, Norway last week. The stations will be installed along highways and they will concentrate on enabling long-distance travel.

Most stations are initially expected to have a capacity of 150 kW. This is planned to be in time for the first electric vehicles able to meet that charge rate coming to market.

Audi’s all-electric SUV, which should be available by the end of 2018, may be the first vehicle to take full advantage of the charging network, the company has said. 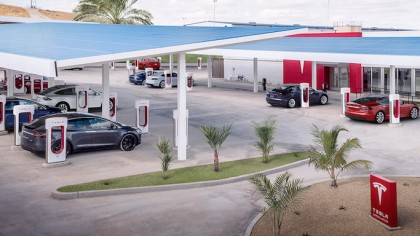 Tesla has finally started seeing some decent charging network competition, with the advance of Ionity, according to experts. However, Tesla already has almost 400 stations in Europe and they plan to double that by the time Ionity gets to 400. But, Ionity currently has the advantage for the charge rate.

The stations are planned to enable between 150 and 350 kW while Tesla’s Supercharger stations are currently rated for 145 kW. Their vehicles can charge at up to 120 kW.

On the other hand, Elon Musk has been talking about the Supercharger V3 for a while now and the automaker is supposed to start deploying ‘Megachargers’ for Tesla Semi, according to Electrek. This means Tesla may also end up increasing the charge rate over the next few years.

In the US, the electric car charging network, Electrify America, will be a catalyst for promoting zero-emission vehicles (ZEV) adoption by offering transformative, customer-centric infrastructure and energy management solutions. There are 290 sites planned until the end of 2019 in the US. There is also further roll-out planned until 2026.