Have you ever heard of nanosats? These are spacecraft the size of a smartphone. As I write this, 40 or more of these nanosats orbit the Earth performing simple, yet highly valuable, tasks for NASA, the US DOD, and some private companies.

But next on the schedule for these tiny spacefarers: giving them thrusters. 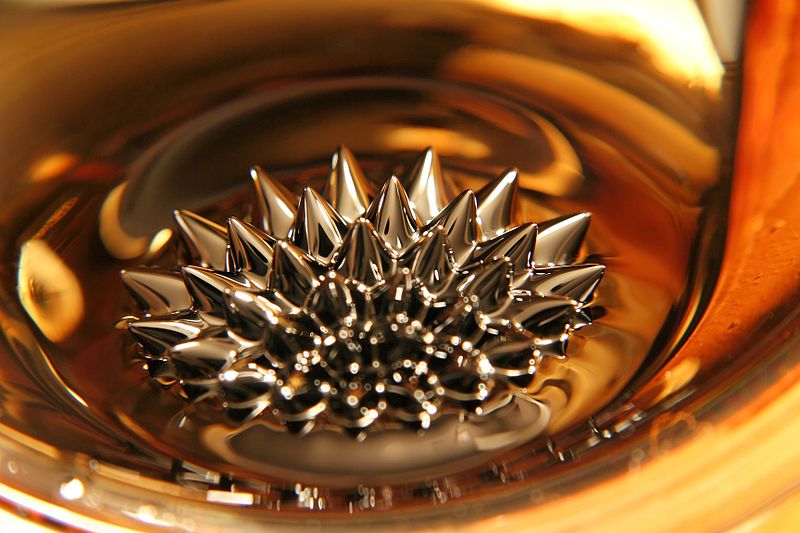 Michigan Technological University's L. Brad King, the Ron and Elaine Starr Professor of Mechanical Engineering-Engineering Mechanics, says "Even the best smartphones don't have miniaturized rocket engines, so we need to develop them from scratch."

However, the ionic liquid containing, needle-like electrospray ferrofluid thrusters that he has prototyped "are so small and intricate [that] they are expensive to make, and the needles are fragile. They are easily destroyed either by a careless bump or an electrical arc when they're running."

So, King and his research team have decided to replace the laboratory-contained microfabrication process required to make the needles with Mother Nature's own assembly process. He says "We're working with a unique type of liquid called a ferrofluid that naturally forms a stationary pattern of sharp tips in the liquid surface. Each tip in this self-assembling structure can spray a jet of fluid just like a micro-needle, so we don't actually have to make any needles."

"It's fascinating to watch. The peaks get taller and skinnier, and taller and skinnier, and at some point the rounded tips instantly pop into nano-sharp points and start emitting ions...First we have to really understand what is happening on a microscopic level, and then develop a larger prototype based on what we learn. We're not quite there yet; we can't build a person out of liquid, like the notorious villain from the Terminator movies. But we're pretty sure we can build a rocket engine," King concludes.