The Intergovernmental Panel on Climate (IPCC) change has released a dramatic report warning that there are less than 12 years for global warming to be kept below 1.5°C. If the earth's mean temperature rises even by half a degree after this time, the risks of drought, floods, and extreme heat are dramatically multiplied resulting in poverty for hundreds of millions of people.

The report calls for immediate and radical action by all global governments, saying the required actions are affordable and feasible but require ambition and dedication. The report was prepared in response to an invitation from the United Nations Framework Convention on Climate Change (UNFCCC) when it adopted the Paris Agreement in 2015.

Report to provide framework for Climate Change Conference in Poland

More than ninety-one authors and review editors from 40 countries contributed to the findings which were launched in Incheon in South Korea on October 8 in front of all 195 signed on parties of the Paris Agreement.

The report will provide the framework of discussion for the Katowice Climate Change Conference in Poland in December when governments review the Paris Agreement to tackle climate change.

“With more than 6,000 scientific references cited and the dedicated contribution of thousands of expert and government reviewers worldwide, this important report testifies to the breadth and policy relevance of the IPCC,” said Hoesung Lee, Chair of the IPCC.

The report, fully titled as Global Warming of 1.5°C, an IPCC special report on the impacts of global warming of 1.5°C above pre-industrial levels and related global greenhouse gas emission pathways, in the context of strengthening the global response to the threat of climate change, sustainable development, and efforts to eradicate poverty, can found on the IPCC website.

“One of the key messages that comes out very strongly from this report is that we are already seeing the consequences of 1°C of global warming through more extreme weather, rising sea levels, and diminishing Arctic sea ice, among other changes,” said Panmao Zhai, Co-Chair of IPCC Working Group I. The report highlights how minimizing global temperature rise is critical.

It uses examples to illustrate the difference just .5°C can make. For instance, by 2100, the global sea level rise would be 10 cm lower with global warming of 1.5°C compared with 2°C. However, the damage is already done in so many fragile ecologies.

The report suggests that coral reefs would decline by 70-90 percent with global warming of 1.5°C, whereas virtually all (> 99 percent) would be lost with 2ºC.

“Every extra bit of warming matters, especially since warming of 1.5ºC or higher increases the risk associated with long-lasting or irreversible changes, such as the loss of some ecosystems,” said Hans-Otto Pörtner, Co-Chair of IPCC Working Group II. Limiting global warming to less than 2ºC will hopefully allow ecosystems and animals to adapt to the gradually rising temperatures.

“Limiting warming to 1.5ºC is possible within the laws of chemistry and physics but doing so would require unprecedented changes.”

The report outlined the changes they believe need to be made for the temperature rise to be limited to 1.5ºC “The good news is that some of the kinds of actions that would be needed to limit global warming to1.5ºC are already underway around the world, but they would need to accelerate,” said Valerie Masson-Delmotte, Co-Chair of Working Group I.

While there are steps to be taken they do need ambitious leaders who are willing to take “rapid and far-reaching” means in all aspects of society from land management, energy, industry, buildings, transport, and cities.

“Limiting warming to 1.5ºC is possible within the laws of chemistry and physics but doing so would require unprecedented changes,” said Jim Skea, Co-Chair of IPCC Working Group III.

A critical step is to ensure human-caused emissions of carbon dioxide (CO2) will fall by about 45 percent from 2010 levels by 2030, reaching ‘net zero’ around 2050. 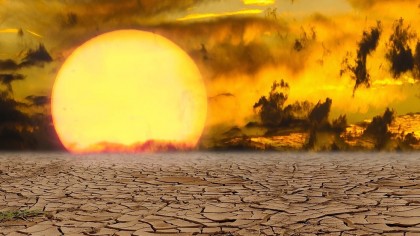 Any remaining emissions would be to be balanced by removing CO2 from the air with other means. The world now turns to their political leaders to take action with the gravity this report deserves.

“This report gives policymakers and practitioners the information they need to make decisions that tackle climate change while considering local context and people’s needs. The next few years are probably the most important in our history,” commented Debra Roberts, Co-Chair of IPCC Working Group II.