Completed in 1876, the Tehachapi Loop was a true feat of engineering in its day and has remained unchanged since its completion.

Straight out of the imagination of a small child with a wooden train set, the Tehachapi Loop is an interesting piece of engineering. For those who remember the game snake, this loop would have got us out of a whole lot of frustration and pain. Built in the latter half of the 19th Century the loop provides a gentle gradient for freight trains to traverse the local terrain. It was a true feat of engineering in its day and has remained unchanged since its completion.

Without further ado, we present, for your pleasure, the Tehachapi Loop! Now, where did I put my train set, it needs a loop of its own.

Stretching for 1.17km, the Tehachapi Loop is a long spiral or helix stretch of railway in Kern County, California. It is located on the Union Pacific Railroad Mojave Subdivision running through Tehachapi Pass. This section of railroad connects Bakersfield and the San Joaquin Valley to Mojave in the Mojave Desert. It is one of the busiest single-track stretches of rail in the world and sees around 40 trains a day. In the US, the frequency of trains and beautiful scenery makes the Tehachapi Loop one of the favored destinations of rail enthusiasts. The loop was recognized as a National Historic Civil Engineering Landmark in 1998. It was also registered in 1953 as a Californian Historical Landmark, number 508 if you are interested.

According to the Californian Historical Landmark registry, it is described as:

"From this spot may be seen a portion of the world-renowned Loop completed in 1876 under the direction of William Hood, Southern Pacific railroad engineer. In gaining elevation around the central hill of the Loop, a 4,000 ft (1.22km) train will cross 77 feet (23 meters) above its rear cars in the tunnel below."

History of the loop

When it was built, way back in 1876, the Tehachapi Loop was one of the engineering feats of its day. Construction was undertaken by Southern Pacific Railroad to provide an easier grade over the Tehachapi Pass. Work began in 1874 with the line ready for operation in 1876. The loop has become known as William Hood's crowning achievement and also cemented him in the annals of engineering history.

William Hood was not alone on this project, however, civil engineer and mining engineer Arthur De Wint Foote also lent a hand in its construction. The loop allows the track to rise at a steady 2 percent grade with a total rise in elevation of 23 meters. At the base of the loop, the track passes through tunnel 9, the ninth tunnel built as the railroad worked from Bakersfield.

Hood chose to construct a loop here to pass over itself as a means of gaining elevation. Incredibly, the whole project was completed in a time before almost no heavy machinery existed. Good old dynamite and elbow grease, mainly Chinese workers, did the job with a total workforce of around 3,000+. Hood's team used a combination of cut and fill methods to keep the grade no greater than 2.2 percent. The entire project, of course, features a short tunnel and overpass. The interesting design allows for a gain in elevation of 23 meters over a relatively short distance, pretty cool.

The Cross at the Loop

The more astute of you might notice a large white cross on the summit of the hill in the middle of the loop. Called, fittingly, "The Cross at the Loop", it stands in memory of two employees  (The conductor, head-end brakeman) who were killed on 12th May 1989 in a train derailment in San Bernardino, California.

At the time, no one could imagine the length that trains would reach in the future. Today a train more than a 1.6 km in length is not uncommon. The loop's design is such that it is possible to see the amusing phenomenon of watching a Union Pacific and BNSF freight train cross over itself on the loop. This type of event is a major lure for rail enthusiasts as well as the plethora of trains that pass through it every day. Many great videos and photos have captured this event throughout the years.

The stretch of track including the loop became the property of Union Pacific in 1996. Trains run by BNSF also use the loop under agreed trackage rights. Sadly, passenger trains are barred from using the line which prevents Amtrak's San Joaquin train from serving Los Angeles. This has been the case since Amtrak's foundation in 1971. There is an exception, however, if Coast Starlight's normal route is closed, it is permitted to use the loop as a detour.

This wasn't always the case,  in the steam and passenger era, before 1971, passenger trains did run on the loop. Visitors or passengers could witness trains such as Southern Pacific's overnight Owl (San Francisco/Oakland to Los Angeles) and Tehachapi (Fresno to Los Angeles) snake around the loop.

Its design and intent to gain elevation over a manageable gradient have worked so well, it's gone relatively unchanged for 125 years. It has been in regular use throughout this time. The loop has become a "must see" for railfans across the US, perhaps the world. The mid-20th Century has seen flocks of fans traveling to visit the site and absorb the stunning local scenery. 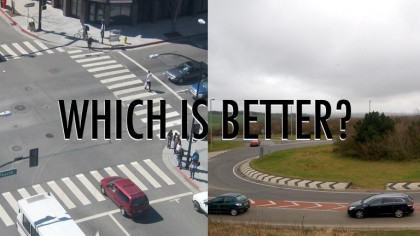 Which is Better: A Roundabout or a 4-Way Stop?

If on the off chance, you haven't been there before, the loop can be difficult to find. It can be accessed by taking the Keene exit from Highway 58 and turn North to Woodford-Tehachapi road. A right turn at this point sends you in the right direction. Turn right again and travel about a mile to a spot where the road joins the tracks. If you do plan on visiting the site, be sure to stop by the small railroad museum located in the town of Tehachapi.

So there you go, the Tehachapi Loop. What do you think about it? Would you like to visit it? Have you been there? We'd be interested to hear your anecdotes or, indeed, facts about this great piece of engineering.