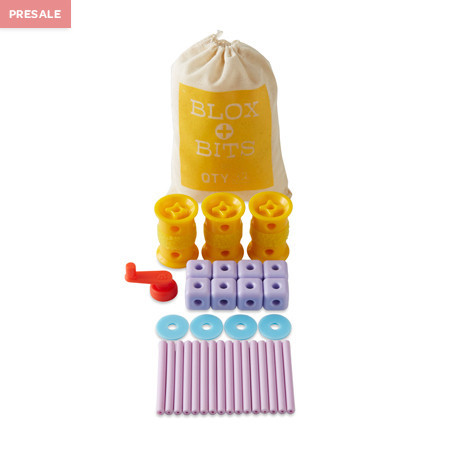 You may think that someone could become an engineer by graduating at some technical university, but some people think in slightly different way. Simply explained, members of GoldieBlox consider that the engineer thought should be formed through the early years of the child. For that purpose they invented many toys that stimulate the engineering thinking in kids. It comes a little bit strange that these toys are designed for girls.
One of the toys makes the children to construct a spinning machine where a belt is wrapped around five plastic tubular pillars. When the child pulls the belt all pillars rotate which respectively rotates the animals above them. In another set kids have to build a parade float with the freedom to create custom designs.
The Blox + Bits set have 32 parts that allow the kid to construct various machines. It includes 3 wheels, 8 blocks, 16 axles, 4 washers, 1 crank, and a bag for parts. The manufacturer offered 5 example designs, but the child is free to construct whatever it decides.
The company intends to prove that engineering is not only a job for boys and men. And also, if a girl demonstrates creativity with these toys it may lead to a successful engineering studying later.

A Young Inventor Created a DIY Helicopter. It Killed Him

Did Engineers Just Save New Orleans From Hurricane Ida?

Ex-SpaceX Engineers Aim to Build the Tesla of Electric Boats