Researchers combined a Stanford-developed app with Google's device to create Superpower Glass, a new autism therapy that operates like a game.

Last month, Stanford University School of Medicine published a worrisome study revealing that kids with autism are afflicted with structural and functional abnormalities in the brain circuit that interfere with social interactions. The degree of presence of these abnormalities was correlated to the degree of social difficulty experienced.

Google Glass, it turns out, could be used to help the children understand and process the emotions conveyed by people’s facial expressions, a normally difficult task for autistic people. The system functions like a virtual game.

A Stanford-designed app is linked with a smartphone to Google Glass. It then uses a camera to record the wearer's visual field, a small screen to show him/her images and a speaker to speak to him/her.

The system monitors the child as he/she interacts with other people using the app to pinpoint their emotions. Through the speaker or screen, the app then notifies the wearer of the identified emotion.

Parents whose children were involved in the study reported they felt their kids improved eye contact and related better to others after just one to three months of regular use. “Parents said things like ‘A switch has been flipped; my child is looking at me.’ Or ‘Suddenly the teacher is telling me that my child is engaging in the classroom’," explained study senior author, Dennis Wall, PhD, associate professor of pediatrics and of biomedical data science.

"It was really heartwarming and super-encouraging for us to hear,” Wall added. The researchers have now named the impressive new treatment “Superpower Glass.”

The device could help provide additional much-needed care in a field struggling with a shortage of qualified therapists. Current treatment waiting lists for children diagnosed with autism can be as long as 18 months.

Those are dire waiting times for a disorder that sadly affects 1 in 59 children in the United States. “We have too few autism practitioners,” warned Wall. 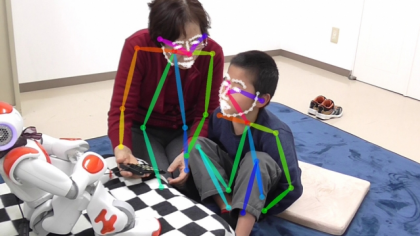 The professor added that time is of the essence when treating autistic children as early therapy has been shown to be particularly effective. Unfortunately, too many children are simply not offered the right care fast enough.

Wall's team is now in the process of completing a larger trial of the system that they plan to use on recently diagnosed children currently stuck on overextended waiting lists. The university has already filed a patent application for the technology and information regarding the project can be accessed online.

“The only way to break through the problem is to create reliable, home-based treatment systems. It’s a really important unmet need," added Wall

The study was published in the journal npj Digital Medicine.