Google Glass Gives You an Interactive Window on the World

Google's Project Glass is in the R&D stages at the time of this writing. It's an attempt to create head-mounted display technology that the wearer will use to "augment reality". The Google Glass HMD is to be like a thin pair of glasses which would have the capabilities of a smartphone but be hands-free (similar to a Bluetooth telephone) and display information on the inside of one of the  lenses. Interacting with the HMD would be facilitated by Google's own Android technology and will be 3G and 4G enabled.

Interaction with and navigation of the Internet would be done via natural-voice spoken commands. Accessing Google Maps, receiving and reading e-mails, interacting on social media, looking up information, and all other Internet-driven smartphone functions would be do-able with Google Glass HMDs. At the time of this writing, the projected retail price, when the HMDs are first put on the market, is $1,500 USD. 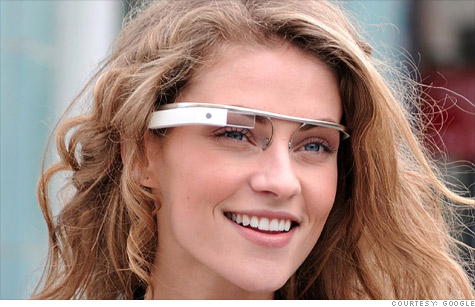 Google is seeking to use bone-conduction for a private audio feature for its Google Glass HMD. Google has applied for a patent to make use of an "indirect bone-conduction speaker” in which the movements of “at least one vibration transducer” would be passed into the HMD wearer's bone structure through the headset. This bone-conduction technology would eliminate the need for a direct point of contact between the wearer and the conduction speaker such as is necessary with Bluetooth headsets.

Yes, with Google Glass HMDs, you’ll have the Cloud in your eyes. And you will see the world from a superhuman perspective. Perhaps they will create Google Glass sunglasses, too.