With the new Measure App, all you have to do is whip out your Android smartphone to measure any object!

Google now makes AR Measure App accessible to a lot more people by widening their horizons and as a result, opening the app to many more devices including Galaxy S9, Pixel 2 and G7 ThinQ! This augmented reality app has been updated by Google in order to support its ARCore standards.

For all those who are hearing about this revolutionary app for the first time, Measure is a game-changing app that works by a large group of extra sensors by Project Tango and enables the app to work as a virtual tape measure.

Now, if you don’t have a tape measure handy, all you have to do is take out your smartphone to measure an object! The app works by enabling the users to randomly select any two points of an object and find out the distance between the two said points.

After the demise of Project Tango, many thought the Measure app would suffer the same fate, but the recent resurrection of the app by Google with its new ARCore standards has renewed hope for the usage of this augmented reality app. This post-tango AR framework works on several more devices and high-end Android smartphones so that more and more people can make use of this neat technology.

Now, if your Android device is ARCore compatible, you can easily accomplish all the things promised by Tango such as a fish-eye motion camera, an IR projector, and a time-of-flight camera to measure objects. All you need to do is point your smartphone at an object and adjust the endpoints of the ‘height’ and ‘length’ tools onto the camera feed to measure it.

The first thing to do when you open the app is to move it around, enabling it to scan the area surrounding you. However, this process isn’t the quickest and can be quite tedious if you plan to measure something.

If you have used Tango, you might be familiar with the margin-of-error that is evident in the measurements. However, the new Measure app lists down the accuracy range of the measurement too.

Shorter measurements can be off by less than half an inch, whereas the longer ones can be off by a few inches. The version 2.0 of the Measure app is definitely far more flexible and accessible in terms of device compatibility, unlike the prior version of the app that was only supported by a few Project Tango phones out there. 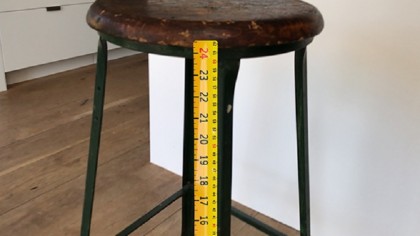 The updated app is also far more improved when we consider its visuals and controls at the things we point the phone at. This news comes right at the heels of the announcement of Apple’s own version of the iOS Measure app that will likewise allow all iOS users to measure things from their phones.

It is safe to say that tech companies are now finally fulfilling their word of creating a utopian augmented reality-led future rather than merely hinting at it!