Google has partnered with Adafruit on its Paper Signals project, which combines creativity and utility into one interactive design.

Origami is a rare category of creativity that people of all ages, skill levels and creative inclinations enjoy. It truly has a universal appeal that has endured, perhaps because of the fact that it is so deceptively simple. With a few folds of paper—but let’s not forget about the all-important creases—virtually anyone can create an intricate design. Until now, the most advanced examples we have in this ancient and time-honored technique is Kamikara, mechanical origami, which uses rubber to create tension and springing action.

Google has taken the art one step further with a new project called Paper Signals, which will appeal to techies, DIY crafters, and anyone in the middle. It involves constructing a paper object in a way that works more or less like origami: this paper, however, is able to visualize information through voice command. The kit includes all the basic parts required to get you started:

-A micro servo for power generation

-An Adafruit Feather Huzzah (which besides being quite a mouthful to say, is essentially a thin and tiny WiFi microcontroller that features battery charging and built-in USB)

The other items, thankfully, can be easily found around the house.

After assembling the items, the template is printed, it’s assembled with the parts, and then the fun of using voice-control with your creation begins.

The appeal of this project is that it offers something that engages users in a highly interactive way. Moreover, it’s clear that Google has made an effort to include people of all skills and knowledge sets in designing this project: for each stage, there are multiple options available. For instance, for those needing a more clear-cut and user-friendly setup, Google offers example templates that include:

-A wheel functioning as a countdown to Halloween

-An arrow pointing up and down to follow Bitcoin

-An umbrella that monitors rainfall in Seattle

-A rocket that follows NASA launches 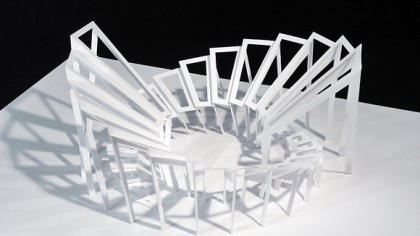 Another alternative is purchasing the Paper Signals bundle from partner company Adafruit from only $24.95. Google has created yet another option for users to make their own custom signals using the platform on GitHub through obtaining an open-source code and making some alterations to existing paper templates.

Given the mass appeal of Google and the Midas touch the company has in terms of aligning itself with innovative ideas, we have no doubts that this newest venture with Adafruit will be another success for the company. In fact, the list of templates Google offers reads like a wish list: in today’s world more and more people are looking for fun and interesting ways to simplify their lives, and if this can be done in a way that is also interactive and engaging, it’s an added bonus.