Google's mysterious AutoML program develops neural networks of its own. The company recently announced that the AI had duplicated itself with a more efficient code.

Google's automated machine learning system recently crafted machine-learning codes more efficient than the codes that built its own system. The (robot) student has now become the teacher. For the AutoML program, it seems as if humans are no longer a necessity.

The project originally started in May as artificial intelligence that would help Google create other AI systems. It was a matter of time before the system out-crafted the master craftsmen; AutoML was made for that.

"Today these are handcrafted by machine learning scientists and literally only a few thousands of scientists around the world can do this," said Google CEO Sundar Pichai last week. Pichai briefly touched on the AutoML program at a launch event for the new Pixel 2 smartphones and other gadgets. "We want to enable hundreds of thousands of developers to be able to do it."

To get a scope of how 'smart' AutoML is, note that Google openly admits to it being more efficient than its team of 1,300 people tasked with creating AutoML. Granted, not everyone listed on Google's research page specializes in AI, but it does include some of the smartest software engineers in the company. Alphabet, Google's parent company, employs over 27,000 people in Research and Development.

Some of the program's successes have made headlines. In addition to mastering its own code, AutoML broke a record by categorizing images by content. It scored an accuracy of 82 percent. AutoML also beat out a human-built system in marking the location of multiple objects in an image field. Those processes could be integral to the future of virtual reality and augmented reality. 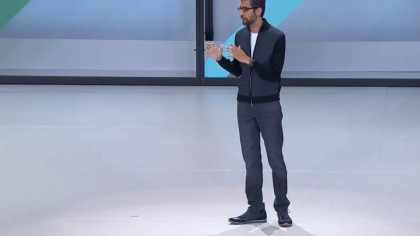 However, nothing else is really known about AutoML. Unlike Alphabet's DeepMind AI, AutoML doesn't have a lot of information available about it other than brief statements from Pichai and other researchers. Google's research team did dedicate a blog post on its website earlier this year. It described the intricacies of the AutoML system:

"In our approach (which we call "AutoML"), a controller neural net can propose a “child” model architecture, which can then be trained and evaluated for quality on a particular task. That feedback is then used to inform the controller how to improve its proposals for the next round," the researchers wrote. "We repeat this process thousands of times — generating new architectures, testing them, and giving that feedback to the controller to learn from. Eventually, the controller learns to assign high probability to areas of architecture space that achieve better accuracy on a held-out validation dataset, and low probability to areas of architecture space that score poorly."

The Future for AIs Smarter than Humanity

AutoML's system of neural networks and its improved efficiency could shorten the traditional woes other developers have had in creating neural networks. It will become increasingly easier for AIs to develop new systems. But where does that leave humans? Ideally, humans would serve as the 'mediators' or as checks and balances. Researchers are concerned that AIs pick up the unconscious biases in its creators. A biased AI developing even more biased AIs would be a disaster. Thus, human software engineers will spend the time they would normally spend on developing on refining these new AIs.

Ultimately, Pichai and the research team hope that AutoML could be used beyond Google.

"Going forward, we’ll work on careful analysis and testing of these machine-generated architectures to help refine our understanding of them," the researchers said. "If we succeed, we think this can inspire new types of neural nets and make it possible for non-experts to create neural nets tailored to their particular needs, allowing machine learning to have a greater impact to everyone."

Via: Futurism, The Next Web