Graphene May Just Become the Next Superconductor, Reveals New Research

Is there anything the super semimetal known as graphene can not do? Not much, according to researchers who designed a study to enhance its conductive properties.

For the past decade, first the scientific community and later the heads of industry began singing the praises of graphene, and for very good reasons. The applications of the semimetal, due to its strength and impressive conductivity properties, promise to offer new approaches to solving a staggering range of dilemmas.

Some of them include the establishment of renewable energy systems, while others cover the realm of providing greater access to safe drinking water. Now, new research from a study carried out by a team of scientists from Helmholtz-Zentrum Berlin has provided evidence that bilayer graphene (BLG) possesses even greater current conductivity than previously believed. Their work was carried out at the research center's BESSY II Electron Storage Ring.

In order to produce their results, the team found a new way of producing a flat bond formation which involved the use of a high-resolution form of angle-resolved photoemission spectroscopy (ARPES) to scan the band structure: the result is an outcome which "allows modification of the band dispersion from parabolic to “Mexican hat”–like through the formation of a flattened band".

This required the researchers were required to re-examine old methods and spot areas of for improvement. Earlier this year, a study demonstrating the conductivity possibilities of BLGs was published by researchers led by scientists from MIT, although it fell short in providing a clear way of translating the method into a more simplified process. 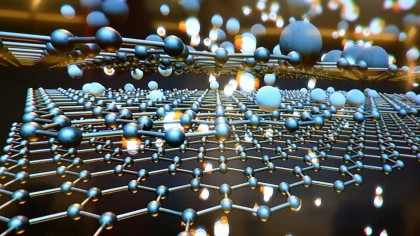 Graphene May be The Key to Meeting All Future Bandwidth Demands

"The double layer of graphene has been studied before because it is a semiconductor with a band gap. But on the ARPES instrument at BESSY II, the resolution is high enough to recognize the flat area next to this band gap," points out Dr. Andrei Varykhalov, who was one of the lead researchers in the study.

Dr. Dmitry Marchenko of the Helmholtz-Zentrum Berlin and first author on the paper, explains how the team's new insights into improving methods to produce a flat area on BLGs provided just the breakthrough they needed.

"It is an overseen property of a well-studied system. It was previously unknown that there is a flat area in the band structure in such a simple well-known system." All this seems to suggest that we have come a long way in terms of how to address the fundamental issue of how to control electronic structure of BLGs.

This, added to the innovations in production processes that we have witnessed this year, is positioning industries to be able to consistently churn out high-quality, industrial and scalable versions of graphene membranes. With its many benefits already proven and backed by dozens of scientific studies, researchers can now get to the work of refining the process that goes into making BLGs. In this way, the development of applications as well as a sound production process can happen at the same time.

Details about the study appear in a paper, titled "Extremely flat band in bilayer graphene", which was published yesterday in the Science Advances journal.