These gravitational waves over the next decade could resolve the debate on how quickly the universe is expanding.

Scientists have debated back and forth the rate at which the universe is expanding for years. However, new measurements of the gravitational waves from 50 binary neutron stars over the past decade could finally put an end to this debate and even shed more light on the origins of our universe.

Ripples Across the Universe

13.8 billion years later, the effects of the Big Bang can still be felt today across the universe. The force generated from the Big Bang has kept the universe moving at an exponential rate for billions of years. Galaxies outside our own system are moving away from us, and the ones that are farthest away are moving the fastest. Think of it as a balloon slowly stretch over time expanding within space.

This rate of expansion is called the Hubble constant, and it is slightly controversial. Currently, the methods being used across the world to produce this rate of expansion seem to be inaccurate or missing bits of information. Though there are two ways to measure the Hubble constant, they seem to produce conflicting results, muddying our understanding of the Big Bang.

Described in the Physical Review Letters by lead author Dr. Stephen Feeney of the Center for Computational Astrophysics at the Flatiron Institute in New York City, Feeney breaks down this conundrum.

"We can measure the Hubble constant by using two methods -- one observing Cepheid stars and supernovae in the local universe, and a second using measurements of cosmic background radiation from the early universe -- but these methods don't give the same values, which means our standard cosmological model might be flawed," says Dr. Stephen Feeney. 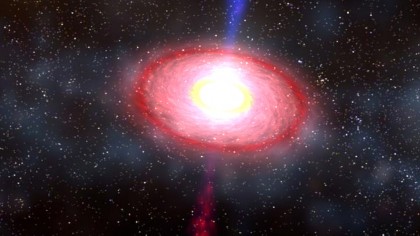 However, this same study indicates there could be hope to solving this dilemma. Researchers believe that new data collected from the gravitational waves emitted by binary neutron stars called "standard sirens" could be the solution.

By observing 50 binary neutron stars over the next decade, researchers believe that they have collected enough gravitational wave data to independently determine the best measurement of the Hubble constant.

Though these type of stars are rare, even in the massive space of the universe, they offer researchers gravitational wave data to independently determine the best measurement of the Hubble constant.  The stars emit waves across space-time easily detectable by the Laser Interferometer Gravitational-Wave Observatory.

Using this data, astronomers can determine the system's velocity and build upon this data to measure the Hubble constant using Hubble's law. This could drastically improve the cosmological model currently being used.

Painted Eyes on Cattle Butts Protect Them From Lions, Per Study