Motorcycle riding is dangerous. There's no questioning that. So any extra level of safety is definitely welcomed into the motorcycling world. Now, Ryan Shearman, founder and CEO of FUSAR Technologies has attempted just that by coming up with an augmented reality helmet that offers extra safety and functionality to the rider.

Speaking from his own dangerous experience, Shearmen describes when he was hit by a motorist, "I was in early morning traffic when an inattentive driver hit me from behind and I was thrown from my motorcycle." It's no surprise that in a collision between motorcyclists and motorist, the motorcyclist is going to come off worse. 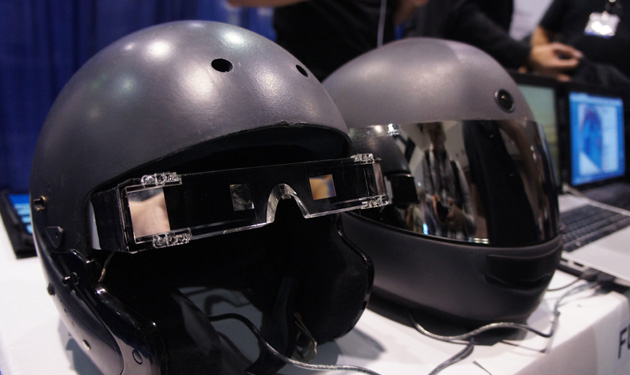 "It started the wheels turning in my head: how can I make motorcycle riding safer?" So he turned to designing and building a helmet that offers the rider an extra pair of eyes and even an extra brain. His Guardian helmet is approved by the Department of Transportation and offers two wide angle cameras and a built in custom Android system. But the helmet is able to instantly communicate to the user using augmented reality glasses and speech.

"What it is, is a fully integrated and connected device that motorcyclists can wear that allows them to have a full cognitive awareness of what's going on around them." The heads up display on the built in glasses offers the information you would expect such as speed, sat nav and even a display from the rear view camera.

"It also has video recording capabilities," Shearman told reporters. "Everything is recorded passively, but in the event that an accident is detected, that footage is locked into hard memory. It effectively has a black box feature built in." Of course we are hoping that the event of an accident is not common, and the Guardian also looks to tackle this frequency.

The built in Android system is currently being customised as to analyse the feedback from the camera to predict any potential hazards and warn the rider before it is too late.

As well as the safety and recording features the helmet can also be controlled by voice to find the nearest gas station or restaurant and can even be used to locate your friends riding elsewhere. Weather updates and route planning also offer an easier journey helping you dodge traffic and bad conditions

The product hasn't yet reached the market but Shearman is hoping to get the Kickstarter campaign rolling by mid-July and if all goes accordingly, the product will hit the markets in about a years time.

A startup's novel unorthodox VTOL P2 Speeder has been unveiled