Gyroscopes: What They Are, How They Work and Why They Are Important

Gyroscopes can often seem to defy the laws of physics. However, these devices actually serve as perfect examples of several laws of Physics and play important roles in some of technology's biggest breakthroughs.

Gyroscopes are cool things. At first glance, they are pretty strange objects that move in peculiar ways and also seem to "defy" gravity itself. The very special properties of these devices have made them invaluable for navigation among other things.

You'll find them in airplanes, space stations, and anything that spins really. It's that phenomena that make gyroscopes so fascinating! A typical airplane will have an entire array of them, including a plane's all-important compass. The Mir Space Station actually used 11 of them to keep it oriented relative to the sun, plus the Hubble telescope has a batch of them too.

In the following article, we'll take a quick look at these peculiar devices and their importance to our modern world.

According to the English Oxford Dictionary, a Gyroscope is a "device consisting of a wheel or disc mounted so that it can spin rapidly about an axis which is itself free to alter in direction. The orientation of the axis is not affected by tilting of the mounting."

While the definition is great, it doesn't really explain how they work or why they are so important (granted we've trimmed the definition a little). First, let's have a look at their 'strange behavior.'

Tricks of the trade

Gyroscopes, in their most basic form, are a spinning wheel/disk on an axle. More complex examples will also be mounted on a metal frame, or set of moveable frames or gimbals for increased precision of the apparatus.

Although they seem like simple objects on the surface they can perform some very strange tricks indeed.

When the wheel isn't spinning, Gyroscopes are effectively over-engineered paperweights. If you try to stand one up, it will simply fall over, obviously.

But we thought they could "defy" gravity? Wait for it, get that wheel spinning and watch the "magic" happen.

Perhaps you've played with Gyroscopes as a child? Maybe you have a fidget spinner? If so, you'll remember how they can perform lots of interesting "tricks". You can balance one on a string or your finger whilst "activated" for example.

Another noticeable property of them, if you've ever held one, is that it will try to resist you moving its position.

You can even tilt it at an angle when suspended from a stand, and it will appear to "levitate" albeit whilst "orbiting" the stand. Even more impressively, you can lift up a Gyroscope with a piece of string around one end.

How do gyroscopes work?

The explanation for this phenomena is tricky to understand intuitively.  Their ability to seemingly defy gravity is a product of angular momentum, influenced by torque on a disc, like gravity, to produce a precession of the spinning disc or wheel. Well, it's rotational axis.

The Earth is actually a great example of precession. As you know the Earth rotational axis actually lies at an angle from the vertical which, owing to its angle, traces a circle as the rotational axis itself rotates. The reason for Earth's "odd" tilt is interesting enough.

A great explanation of how gyroscopes work can be found in the following video:

This effect is enhanced the faster the disc or wheel is spinning, as Newtons Second Law predicts. This seems pretty obvious to anyone with a basic knowledge of physics.

The main reason they seem to defy gravity is the effective torque applied to the spinning disc has on its angular momentum vector. The influence of gravity on the plane of the spinning disc causes the rotational axis to "deflect". This results in the entire rotational axis finding a "middle ground" between the influence of gravity and its own angular momentum vector. Now, remember that the gyroscope apparatus is being stopped from "falling" towards the center of gravity by something in the way -- like your hand, the frame/gimbals or a table, for example.

Now, factoring in the fact that it is being stopped from "falling" towards the center of gravity by something in the way leads to the fascinating properties we see in these devices.

A picture -- well video -- is worth a thousand words, so we'll delegate a more in depth explanation to the following video:

Scientists tend to use what is called the "right-hand rule" to visualize this.

The interesting properties of Gyroscopes have provided Scientists and Engineers with some fascinating applications. Their ability to maintain a particular orientation in space is fantastic for some applications. Slap on some sensors and you've got a recipe for greatness.

Gyroscope cages have electrical contacts and sensors that can relay information to the pilot whenever the plane rolls or pitches. This lets the pilot and guidance systems "know" the planes current relative orientation in space.

Despite their simplicity in design, they have become essential pieces of kit for anything from an ocean-going ship to the Space Shuttle and of course Helicopters. 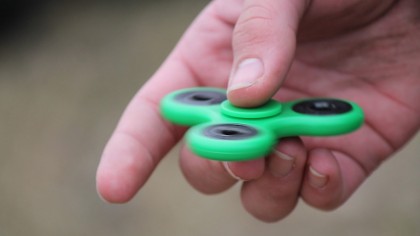 In all, gyroscopes are pretty incredible even if you don't realize a device incorporates them. Amazing to think that such a simple device can perform such interesting and "mysterious" tricks. Despite their simplicity, they have fantastic properties that scientists and engineers have exploited to make our world that little bit better. Without gyroscopes, our modern world would be unrecognizable.

If this article has sparked your imagination and want your very own Gyroscope, there are plenty of online retailers to choose from. How on Earth could you refuse?

A Guide to Gears: 7 Gears, Their Traits, and How They Work