After well over 50 years, this Japanese experiment has produced some magnificent man-made crop circles.

An experiment that dates all the way back to 1973 has quite literally come full circle, creating beautiful out of this world crop circles. You are probably well versed in the mystery and awe surrounded around crop circles.

Allegedly extraterrestrial in nature, a crop circle is a pattern created by flattening a crop, usually a cereal. However. unfortunately, these Japanese forest patterns are not alien in nature.

In 1973 scientist were eager to explore experimental forestry, an area administered to provide the research necessary for the management of the land.

The Japanese research team wanted to better understand the spacing of trees and the effect of growth, with the running theory stating that trees planted farther apart develop a canopy close to the ground.

The research team planted a host of cedar trees a certain distance from each other. The trees were planted near Nichinan City in Miyazaki Prefecture with the smaller inner circles expanding into larger radiuses creating a hypnotic circular design that can be seen from the air. 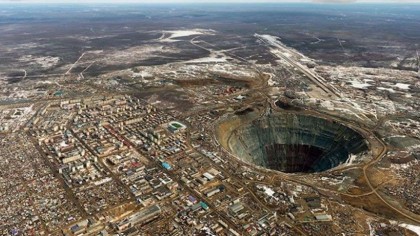 Mirny: A Giant Diamond Mine that Sucks Helicopters In

The final results of the experiment produced a concave shape, implying that the outer circles of the cedar tree crop promoted higher growth, while trees closer to the center produced a smaller density of trees.

According to Japan’s Ministry of Agriculture, the height difference between the smallest trees at the center and the tallest trees on the outer ring was over 5 meters. Again, this implies that trees in less dense areas have more access to resources while trees in the center, have to compete for sunlight and water.

Currently, the research team is bringing the experiment to an end. The tree will be harvested soon. However, they intend to find ways to preserve the crop circles, and even potentially use it as a tourist attraction.

Play with the Google Map here to get an even closer look at crop circles in the Miyazaki Prefecture, Japan.

Have you come across any crop circles recently? Leave your comments below.

This YouTuber Made Shocking DIY Versions of Ancient Egyptian Tools