What Happens When You Fill a Balloon with Liquid Nitrogen?

Liquid nitrogen maintains a temperature of between -320˚F and -346˚F, and it can freeze almost anything instantly. One of the coolest effects of this super-cooled liquid is that if you dip something in it, it becomes so cold that you can shatter the object, even if it was previously soft or malleable. Liquid nitrogen is definitely not something that should be messed around with, as it can cause serious injuries if it touches your bare skin. There are some pretty cool videos of people dipping things in liquid nitrogen, but what if you filled a balloon with it – what would happen then? Check out the video below and see for yourself.

The balloon is made of rubber, which is normally quite flexible, but if you know anything about liquid nitrogen, you know that it will cool the rubber down to a state where it becomes rigid and brittle. There's not really an easy and safe way to fill a rubber balloon with liquid nitrogen, so Grant Thompson, the man behind the video, fills it with air and then inverts a thermos to fill the balloon. After he does this, the liquid nitrogen starts converting back into its gas phase and filling the balloon. This is particularly surprising because the rubber did not fracture or break.

It eventually fills up enough to explode the whole balloon, spewing the remains of the liquid nitrogen everywhere. The balloon shattered into a million tiny pieces of rubber when it exploded, likely caused by the effects of the super-cooled liquid nitrogen. After the first normal balloon worked, the next obvious choice is to fill a giant balloon with it, but that stunt will, of course, be kept for another video. 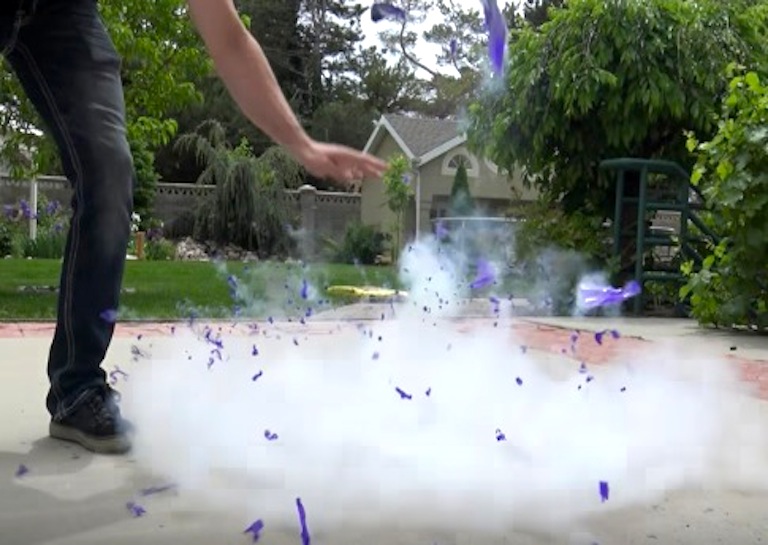 Surprisingly, liquid nitrogen, at least in the U.S., isn't heavily regulated and most people can just go out to a local distributor and pick some up. We are not recommending you go play with the stuff, but if you do, be safe and understand the liquid's dangerous effects.