What Happens if You Roll a Car Down a Cliff with a Roll-cage Held Together by Duct-tape?

It's a perplexing question, perhaps asked by no one but nevertheless Fiberfix has answered and tested the experiment showing what happens if you roll a car down a cliff with a roll cage held together using tape. While using duct tape is probably a bad idea, Fiberfixe's new tape which is as strong as steel (literally) could make the experiment potentially viable. Without further ado, here is the most intense video you have seen all day.

As largely anticipated, the duct tape roll cage failed miserably breaking off into many pieces and leaving the car completely destroyed. However, with Fiberfixes tape holding together the joints of the bars, the car escaped- almost completely unscathed.

Before attempting the car-down-a-cliff shot, the team reached out to a mechanical engineer to determine if the plan was remotely feasible. However, with too many variables and assumptions, the engineer could not formalize a conclusive analysis. The team then decided to take it upon themselves to construct and test the apparatus. Initially, the team wanted to construct the entire roll cage using PVC pipe wrapped in Fiberfix . However, while Fiberfix is incredibly strong, it also has flexible characteristics that prevent the PVC pipe from being able to bear large loads. The team then decided to rig up a metal roll cage with each cross-section and connection joint to be held together with nothing but tape. Without a vague idea if the cage would hold or not, the team put the vehicle to the ultimate test. Two similar cars were rigged with the taped roll cages, one with duct tape, the other with Fiberfix. To be a fair comparison, however, twice as much duct tape was used on every joint. (To learn more about the setup, you can check out the behind the scenes video linked at the bottom).

The technology behind the tape

Fiberfix is a revolutionary new tape that offers not only a temporary fix but a permanent solution that could fix up your broken shovel and make it stronger than it ever was before. The tape features a unique weave pattern and a precisely engineered resin that enables it to be impact-resistant, watertight, and impossibly strong- as strong as steel- literally. While the company lays claims that the tape is 100 times stronger than duct tape, the figure was merely a modest slogan that was proven to be incredibly wrong. A study was conducted using a three-point flexural load test in which two galvanized steel pipes were secured with tape and placed underneath a hydraulic press to determine how much weight they could bear before structurally falling. The end results saw Fiberfix sustain 200 times as much force, withstanding 2,000 lbs where duct tape only held 100 lbs.

The tape was initially modeled after medical casting tape in which the team attempted to replicate the hardening properties and use it to fix other things instead of just bones. After reaching out to Fiberfix, the team further revealed how their unique blend of tape was derived.

Says Eric Child, one of the developers behind Fiberfix.

While medical casting tape is superb at holding together bones with further abilities to bear large weights, its impact and water resistant deficiencies hindered it from being used for any other application. To attain their three goals, the tape had to be completely redesigned. Erik continues,

"So, we had to reformulate the product considerably.  We tested dozens of variations of resins, knit and weave patterns, strand materials, and so forth using high-pressure compressors (to test water tightness), sledgehammers to test impact resistance, and even partnered with Brigham Young University's Engineering Department to use their high-powered hydraulic presses to test loads.  Eventually, we found a combination of product characteristics that achieved everything we were looking for. "

Apparently, their everything also involves having the ability to roll a car down a hill with a roll cage secured with nothing but Fiberfix.  The end result is an impressively strong tape that threatens to supersede the long-standing, record holding in fixing, duct tape.

The tape can be purchased online in packages containing multiple roles for different applications starting at US $25. You can find out more on their website. 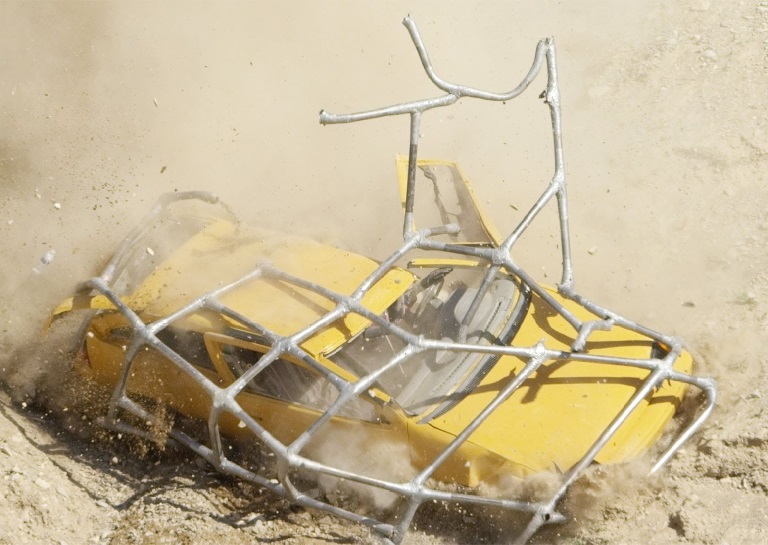 SEE ALSO: The Times Astronauts were Saved by Duct Tape