Happy Halloween from These 10 Creep-tacular Robots

Every year, Halloween forces us to face our deepest, darkest fears. This scary celebration has had many iterations around the world, but it was originally tied to the pagan Samhain rituals of the ancient Celts. As the days grew shorter, the Celts believed the barrier between the realm of the living and the spirit world grew permeable and, on the night of October 31, that the spirits of the dead walked the earth.

Modern Halloween celebrations still draw on ancient symbols of fear, including bats, witches, skeletons and spiders. Interestingly, so does the field of robotics. Bio-inspired robots are often developed to help better understand things like animal neural networks, scientific principles like propulsion and human speech. That said, they can be creepy as all get-out. Prepared to get scared by these ten truly terrifying robots:

Few things are creepier than cockroaches. They're fast, they're impossible to kill and they hide in moist, dark places. But it's exactly these attributes that made Dr. Kaushik Jayaram want to study them from an integrative biology perspective during his time at UC Berkeley. 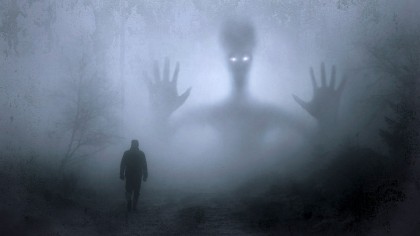 Dr. Jayaram was impressed by the way American cockroaches can squeeze into areas 25% their size and rebound from a sound smashing by a force 900 times their own body weight. (This would be like a human getting crushed by a weight of 55 tons and then hopping up to tell the tale.)

The fruit of the UC Berkeley team's labors was the Compressible Robot with Articulated Mechanisms, nicknamed CRAM. Fortunately for us, the buggy bot came out looking more like a pill bug than a proper roach, with a sectioned hard shell that easily bounces back from pressure. Researchers anticipate that CRAM will be just the robot to help find survivors during search and rescue operations in places humans cannot safely enter.

Number two on our list is the Child-robot with Biomimetic Body, or CB2. Scientists are using this robot to study human-like recognition development in robots, and since 2007 it has been learning by recording human facial expressions. Although this might sound rather benign, once you cast your eyes on the robot you might change your mind.

CB2  is a little over a meter tall and a weird pallid grey color. In fact, you might be fooled into thinking it's actually a small child in a terrible costume. This cartoon-like "kid" has more than 50 degrees of freedom, which allows unrestricted movements and realistic vocals. Multimodal sensors and soft skin make this ghostly bot easy for humans to interact with the robot, which can also pick up on auditory, visual and tactile stimuli. The truly eerie part? When this ghostly three-fingered silicon robot gets into the fetal position and opens his mouth.

Professor Ishiguro of Osaka University, who is responsible for three robots on this list, including CB2 above, really outdid himself with Erica.

"I think that this is the most beautiful face in the world. She's cute isn't she?" said Ishiguro in a video interview with Bloomberg. With her French-manicured nails and wavy bobbed hair, Erica is stylish, too.

Erica responds to speech in kind, makes jokes and apparently get's angry when teased. According to the Ishiguro, Erica emits "sonzhaikan" a Japanese term that encompasses the human presence that Erica embodies—in other words, the thing that makes her so creepy.

Dr. Ishiguro takes the ick factor to a whole new level with a robot that looks exactly like him. Gemini HI-4—from his lab's Geminoid series of robots—is a near-identical replica of Ishiguro. Hiroshi made a mold of his own physique to wrap the robot in and programmed it with his own body language and voice. He even implanted some of his own hair into the head. Does this remind anyone else of Kuato from Total Recall? As if that weren't weird enough, Ishiguro himself has plastic surgery to keep his own body looking like his robot twin, something he admitted in a BBC documentary about robotics.

Robugtix's T8X serves up the ultimate scare for arachnophobes. This big bad bot has a rechargeable battery, is able to be programmed and has wireless capability. There's even a hairy, tarantula-like version. More than 20 leg sensors are responsible for the creature's creepy movements and strangely adorable dance moves. Because most people's phobias of spiders are based on conditioning rather than actual experience of a traumatic arachnid event, we're pretty sure the Robugtix will continue to scare the crap out of many even though it can't bite.

Female Figure, arguably the single most disturbing work of animatronic art ever, is an unpleasantly realistic of installation art created by Rhode Island School of Design alum, artist Jordan Wolfson. A scantly appareled woman with a witch mask voices cryptic sentences about love and death, and then dances to music in front of a mirror to which she is connected with a metal pole. Her white dress and skin are covered with smudges of dirt and burns. As if this weren't off-putting enough, eye cameras equipped with facial recognition software allow her to make eye contact with viewers and she bumps and grinds. Oh, and she has fangs.

Einstein was an inspiration to us all but would you really want a robotic one in your home? Our answer is a resounding "hell, no!" but last year Hanson Robotics showcased their Albert Einstein Hubo robot at a Las Vegas electronics show.

Robot Einstein came out of a collaboration between Hanson and the South Korean Advances Institute of Science and Technology. Introduced in 2005, Hubo is the first android head mounted on a life-size walking robotic frame. Watch the video below to see Albert Einstein come back from the dead.

Developed by Boston Dynamics, BigDog is an advanced walking robot, whose unnerving gait makes him look like something from a horror film. BigDog is funded by DARPA with the aim of using it to carry heavy loads of rough terrain. Of course, its monstrous walk might make it better suited for use as a terror weapon. This scary mutt has an on-board computer, navigation and locomotion sensors, a gyroscope, LIDAR and stereo vision, according to the Boston Dynamics website. The one thing he doesn't have? A face. Creepy.

Otherwise known as RoBear, RIBA (Robot for Interactive Body Assistance) could well be something out of your worst nightmares. Set with a permanent maniacal grin this "cute, lovable, cartoon-like" bear-headed robot would certainly creep you out after some time.

Designed by the Centre for Human-Interactive Robot Research center in Nagoya, Japan, RoBear is supposed to help patients move around by carrying them. Each robot can lift and carry about 80 kilograms. But would you want to stay in a facility solely manned by these robots? We sure as heck wouldn't.

Back to Japan one last time with Kagawa University's robotic human mouth. This disembodied robotic mouth comes complete with motor-controlled organs, eight vocal chords, a rubber nasal cavity and a silicon mouth, which we think drastically ups the creep factor.

This robot was initially developed to help voice train the auditory-impaired and (we suspect) generally scare the hell out of people with its weird sounds, talking, and singing. It can even listen to its own voice and make the necessary corrections in pitch and tone to sound more human. Of all the unholy songs to choose from, here it is singing the theme from Tetris.

This article was written by Ruth Terry and Christopher McFadden.