Mobile game developer Niantic, makers of Pokemon Go! and cult-favorite Ingress, launched their latest game, Harry Potter: Wizards Unite to a strong download rate and decent first day revenue, but many feel they must point out that this is well short of Pokemon Go!'s blockbuster first day revenue haul of about $2 million, but that may not be the bad thing many are suggesting.

Harry Potter: Wizards Unite, the latest release from mobile game developer Niantic, is off to a solid start for a mobile title, reaching 400,000 installs in its first 24 hours and generating about $300,000 in revenue across the Google Play and Apple App Stores after its Friday launch--but this is a far cry from Niantic's blockbuster release, Pokemon Go! which saw 7.5 million downloads and around $2 million in revenue in its first 24 hours.

In a new report from Sensor Tower, Harry Potter: Wizards Unite is seeing downloads and revenue figures on its first launch day that should otherwise be worth celebrating, with a 30-day projected revenue of about $10 million, yet somehow the only thing we can talk about is how Niantic's latest game isn't performing as well as its last.

It isn't hard to see that Pokemon Go! was going to have a much more invested fan base than Harry Potter: Wizards Unite likely ever will, especially at the outset. Pokemon Go!'s game design borrows heavily from the classic Nintendo games, which were themselves a global phenomenon for a decade and a half after it first hit the market in the 1990s, so it hits all the same triggers that the old Gameboy titles did.

The Augmented Reality/Mixed Reality game had a strong, built-in brand identity with a massive potential user base who had grown up playing Pokemon games for close to two decades, so its numbers were bound to be strong, though few anticipated the frenzy the game would create upon its release.

The combination of a free, easy install on your mobile device, simple game mechanics built around the evergreen money-tree of collecting the entire set of something, and rare, low-probability random drops of "high-value" pieces to fill out that set all but ensured Pokemon Go!'s blockbuster success after it launched.

Not to mention that once the craze started, all the rest of us who couldn't tell a Pokeball from a billiard ball got FOMO'ed into downloading the game but then never played it beyond the first few minutes. All told, Pokemon Go! was an impossible game to follow-up from a developer's standpoint, and they might not have really wanted too either.

Was Pokemon Go! as Deadly as Urban Myth Suggests

This kind of runaway success might seem like the best possible outcome, but it got bad pretty quick once reports started going around of people paying the game so intently that they lost sight of their surroundings, leading to some genuinely tragic stories. Worse still were those who tried to sneak in some Pokemon Go! while they were driving.

A 2017 study of a single county in Indiana found a statistically significant correlation between so called PokeStops, places where players could recharge their supplies, and the appearance of clusters of auto accidents following the games July 2016 launch.

“We used the most conservative assumptions that were supported by the data," said Purdue University's Mara Faccio, who along with John McConnell, also of Purdue, carried out the study. "We are quite confident of the extrapolation and, if anything, we are understating the effect."

Faccio and McConnell's findings were pretty grim. In Indiana's Tippecanoe country, they were able to attribute 134 traffic accidents to drivers playing Pokemon Go!, two of which resulted in fatalities. Extrapolating outward to the rest of the country, you have nearly 150,000 traffic accidents and 256 fatalities that could be attributed to drivers playing Pokemon Go! behind the wheel.

“The statistical analyses they performed appear to be sound, correctly applied and actually statistically significant,” said Brandon Schoettle, of the University of Michigan's Transportation Research Institute. Shoettle was quick to point out, however, that Tippecanoe country had one major urban center, a major college town, with the rest being largely rural with a lot of young, inexperienced drivers.

“I believe these results for Tippecanoe county, Indiana, are accurate and probably reliable. But I am not so sure that this county is very representative of the rest of the country,” so the extrapolated numbers are most likely lower than the authors estimate.

It wasn't just Faccio and McConnell, however, who picked up on Pokemon Go! related injuries and deaths. 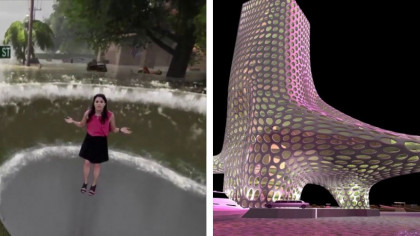 A website set up to keep track of all the Pokemon Go! related injuries and fatalities, called PokemonGoDeathTracker, collates some of the headlines since the game launched where Pokemon Go!, injuries, or even death came together. And, for the record, the total numbers as of today are 18 deaths and 58 injuries where the game is believed to have played some role.

How much of this is hard data and how much of it was a good old-fashion moral panic over some new thing the kids are doing that is going to get them or others killed? Browsing the search results for news about injuries sustained around Pokemon Go!, there's a whole lot of people who got robbed or assaulted, but not nearly as many people falling off cliffs to their deaths as we might all remember hearing about.

And even in that one spectacular case of two men in California walking off a cliff while playing Pokemon Go! that everyone shared on social media back in the summer of 2016, most people would tell you that they remember that they'd fallen to their deaths; they didn't. Both men survived, though they did sustain injuries. Such stories naturally take on a life of their own.

In reality, with tens of millions of downloads over the years, Pokemon Go! probably still has a fraction of the cases of injuries and fatalities attributable to it than could be attributed to WhatsApp or even simply texting.

The Problem is All Apps, Not Any Particular One

Traffic accidents were on a 25-year decline right up until 2011, when they bottomed out and began climbing again. What changed in 2011? There were 800 apps in the Apple Store in 2008, with a total of 10 million downloads. By 2011, there were 500,000 apps in the Apple Store, with total downloads around 18 billion. This trend started way before Pokemon Go! many would argue, and they would be right. Plenty of articles have been written about how we've become obsessed with our screens, but that's not really the problem. We've always been obsessed with screens as far back as there have been screens, whether Movie, TV, computer, or mobile device.

The problem is the pace; games or apps that do it all as fast as it takes to ride three stops on a bus or while you're waiting for class. Condensing entertainment into that narrow a timeframe is going to lend itself to digital sugar highs, which is exactly what Pokemon Go! was when it started. It matured with age, but only after the craze had died down. It may have had more than 7 million downloads in its first 24 hours, but the day they installed it was also probably the last time most people  even played it.

So this isn't a problem with Pokemon Go! exclusively, but it isn't a game distinct and apart from this trend. It may have been one of the best examples of it in recent years.

Nobody goes into the video game industry to make games that end up implicated in untimely deaths or injuries, or that distract people while walking home at night so they get mugged. And of course, if it wasn't Pokemon Go!, it would have been someone else's game or app. Still, while Niantic clearly isn't to blame for any of these incidents, they chose to make their follow-up game one that is full of lore, featuring more complex game mechanics, and more invovled tasks, thereby slowing down the pace.

Harry Potter: Wizards Unite rewards those who take things slower instead of racing off to the next point of interest on the other side of the interstate. Its not the kind of game that goes for the easily-manipulated, lizard-brain dopamine triggers the way Pokemon Go! did. And you can read it in the reviews for the game. For every two articles praising the game's richness, someone somewhere points out that 'it doesn't have that Pokemon Go! magic.'

That may be the point. Niantic's latest game is showing a very strong install rate and brought in a healthy first day revenue without causing a spate of incidents where people walk into traffic because they can't pull their eyes away from their screen long enough to see where they are going. It's on track to perform well financially, over the next month, though at a more modest pace than its predecessor.

It also doesn't seem like the kind of game that will send many people stumbling over a cliff or causing an accident because they were trying to squeeze in some quick fix while waiting at a stop light. This is certainly what the developers at Niantic would prefer, even if its not as splashy and its not making them money hand over fist.

They're making enough and they get to make games that people can enjoy without the possibility of paying a serious real world price for it. They're doing alright over there. A more serious question we should be asking ourselves is why so many are treating Niantic's Harry Potter: Wizards Unite like it is a mild failure at all just because it couldn't match the impossible and likely unhealthy standard set by Pokemon Go!