Harvard's milliDelta is a delta robot that can make 75 short, precise motions per second.

Fast, small, and dangerously precise, Havard University's milliDelta is an impressive feat of engineering. The world of robotics has evolved over the years to bring to fruition machines that can tackle almost any task. Pairing the robots with machine learning capabilities and artificial capabilities is a potent combination, allowing robots to get "smarter" at these tasks that they are completing. Yet, before researchers go off and make robots smarter than us, they need to make these technological feats far more refined. The milliDelta is a scary step in the right direction.

Executing up to 75 motions a second, human eyes cannot pick up the individual movement's of the milliDelta or catch its rapid motion on camera. Why would researchers need a robot this fast? The precise little robot could tackle a host of projects, assisting in assembly lines, and making tiny circuit boards.

To put into perspective how fast the milliDelta is, Harvard researcher and co-first author, Hayley McClintock described the miliDelta stating, “Delta robots are pretty fast, but ours basically blows those ones out of the water. Most currently available delta robots are around a couple of hertz, so a couple of picks per second, and our delta robot can move up to 75 hertz — so it’s 15 to 25 times higher frequency than anything that’s currently available."

Delta robots themselves are nothing new. These robots have been used across the industrial world for their "pick and place application" paired with their high-precision and speed. These robots have been used in assembly lines as well as in the medical world. Delta robots are controlled by a motor located in a central base station rather than having rickety motors located in their joints like other industrial arms. 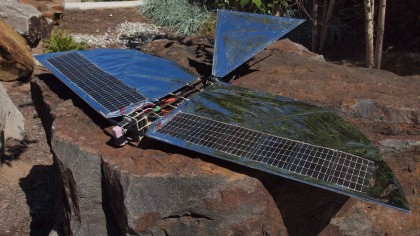 The origami-inspired robot can reach velocities of .45 m/S and accelerations of 215 m/s². Even more impressively, the Harvard robot is only 15 mm x 15 mm x 20 mm and weighs just 430 milligrams, but has a payload capacity of 1.3 grams.

The real excitement comes in with the milliDelta's potential applications in microsurgeries. Being able to move precisely move and quickly through the use of the robot would be an obvious aid in tackling medical surgery that requires a more delicate touch, canceling out any shakey natural movements in a surgeons hand.