A soft exoskeleton being developed by researchers at Harvard's Wyss Institute could let people carry a larger payload over long distances or help stroke victims walk more steadily. It was recently awarded a US$2.9 millon grant from DARPA to further its development as part of the Warrior Web program.

When you read about exoskeletons in the news you're used to seeing large bulky metal devices that provide extra strength but hinder mobility somewhat. Harvard's so-called “Soft Exosuit” however is a lightweight, low-profile suit made of fabric. The current prototype comprises of nylon mesh and spandex and is strapped to the user with cables, almost resembling a climbing harness.

The suit provides extra force that closely aligns with the natural movements of muscles and tendons. Sensors monitor the users movement and the battery powered motor mounted at the waist controls cables to pull up on the heel or on part of the leg near the hip. Researchers had to carefully study the way people walk and determine which muscles would benefit from the added forces offered by the Soft Exosuit.

“It’s quite lightweight, flexible, and conformal,” says Conor Walsh, a professor of mechanical and biomedical engineering at Harvard. “It doesn’t disrupt normal walking and movement.” 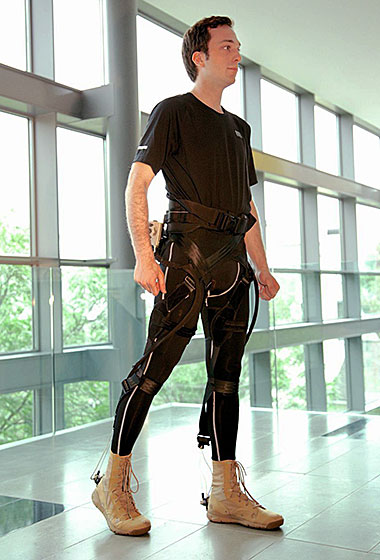 The user doesn't have to control the suit, it's designed to work with the natural motion of the wearer. As the suit has such a low-profile it can be worn under the user's clothes too. It's going to be developed with military uses in the focus, however, the team also plan on collaborating with clinical partners to develop a medical version of the suit that could greatly benefit stroke victims for example.

“Over just a couple of short years, Conor and his team will work to fundamentally shift the paradigm of what is possible in wearable robotics,” said Wyss Institute director Don Ingber. “Their work is a great example of the power of bringing together people from multiple disciplines with focused resources to translate what first seems like a dream into a product that could transform people’s lives.”

Can We Harness Himalayan Hydropower? Yes, But It's Risky