After a controversial conference in 2018, CES 2019 hopes to correct its past mistakes

The problem of underrepresentation in the technology industry has long been a subject of conversation and controversy.

The most recent CES conference in 2018 only underlined this problem when, for the second straight year, every keynote speaker at the conference was a man—and most of them were white. The ensuing backlash was nearly universal and in response, the Consumer Technology Association promised that this year would be different; but have they followed through?

The issue of hiring and promoting women and minorities in tech is a well-documented problem. Everyone from Facebook to Google has struggled with the problem of underrepresentation, and many argue that the problem is a lack of qualified applicants from underrepresented groups or deploying outright offensive rhetoric to justify the disparity.

“To keynote at CES," Karen Chupka, then the Senior Vice President of the CTA, said in a blog post in December 2017, "the speaker must head (president/CEO level) a large entity who has name recognition in the industry. As upsetting as it is, there is a limited pool when it comes to women in these positions. We feel your pain. It bothers us, too. The tech industry and every industry must do better.”

For many, that isn’t good enough.

Amazing women innovators in tech and media who would slay any keynote anywhere. Came up with these in less time than it took to drink coffee. In no particular order...
Other ideas? pic.twitter.com/jnpFKGWHzW

COME ON. So many amazing women who can rep at @CES. Action Alert | The Keynote Speakers At CES 2018 Are All Men https://t.co/ykYiQYJ05F via @genderavenger

Gina Glantz, the co-founder of GenderAvenger, an advocacy group working to boost the public voices of women and people of color, was quick to point out that the CTA was essentially hiding behind selection criteria that they themselves wrote.

She told AdAge that “if its result is all white men, then they need to rethink their criteria to ensure they have innovative, smart, different ... perspectives on their stage of women and of people of color."

And it’s not just activists outside the industry complaining about the lack of diversity at the conference anymore, as heads of major companies have called on the CTA to make changes to the way the conference is run, starting with the inclusion of more women as keynote speakers and panelists.

Industry Frustration at the Lack of Representation

All men should boycott @CES if women are not invited to speak! Insulting in this day and age. We must do better!! @leslieberland @BradJakeman @KLemkau @lindaboff

@CES one more time- please address this. And by addressing it, we don't mean pointing out that there are lots of women in the less prominent speaking spots. Not good enough. We expect AT LEAST 50% female/POC keynote line-up. #changetheratio #diversity https://t.co/FhatTSwGn7

Last year appears to have been a breaking point for many in the industry. With the Women’s Marches around the world in 2017 and the emergence of the #MeToo movement, people are speaking up about the need for systemic change in how women are treated in society and especially the workplace.

GenderAvenger’s public criticism of CES in 2017 didn't garner much attention, but their repeated criticism at the 2018 conference was soon picked up by industry voices and amplified on social media.

Brad Jakeman, a former executive at PepsiCo, put out a call on Twitter for industry professionals to express their frustration with CES 2018’s lack of women keynote speakers.

Calling all my CMO and Advertising friends who were planning to go to @CES to express your thoughts to @CES on this issue. #diversity #innovationnothomogeneity. #changetheratio. https://t.co/y6XDEXd1hy

Leslie Berland of Twitter and Sonos’s Joy Howard responded, demanded that the CTA do more to fix the deficit. Taking the initiative, both Howard and Berland organized all-female panels to discuss industry issues in their respective areas of the conference.

1/ I’m thrilled to announce this lineup of amazing women in tech who will be hitting the Twitter stage during CES on Jan 10th! We’ll also livestream on Twitter via @twitterwomen. #HereWeAre #ChangeTheRatio pic.twitter.com/wHMQuy8dXP

"Over time we had lost interest in the show,” says Howard. “When we saw the keynote line-up, it really woke us up to why. It's the lack of diversity. This was a clear opportunity for us to take action and to give voice to women in technology who we don't feel like we hear from enough." Howard ultimately organized four all-female panels at the 2018 Conference.

The sustained criticism prompted Shapiro to write to Glantz and promise to do better for 2019. Glantz was cautiously optimistic, "We have a statement of their commitment and that's good. We are going to be watching next year for more women keynote addresses on the main stage at CES."

Turning Things Around for CES 2019

With CES 2019 only a week away, the line-up of keynote speakers and overall presenters at the conference shows that the CTA was listening.

The rapid turnaround from the prior two years has surprised even the CTA’s most vocal critics. GenderAvenger, the CTA’s most sustained antagonist in the controversy praised the CTA for delivering on their promises from 2018.

In awarding the CTA GenderAvenger’s Gold Stamp of Approval, Glantz wrote to Shapiro and now Executive Vice-President Chupka, “We want to recognize the responsiveness of the team at Consumer Technology Association and CES for acknowledging problems with their previous speaker lineups and changing the numbers.”

Glantz goes on to write, “GenderAvenger counts women's voices because we believe more women on stage means more women being acknowledged for the power of their perspectives and experiences which translates into greater respect. And along with respect comes the prospect of diminished abuse."

Turning a Corner or a False Start?

While the CTA is to be commended for their genuine effort in rectifying their embarrassing lapses from 2017 and 2018, it remains to be seen if this is a lasting change or a one-time PR move.

So far, the CTA has not announced any changes to its criteria for selecting keynote speakers, and this must be addressed in the years ahead. The main obstacle is that the CTA isn’t wrong in pointing out that there is a stunning lack of women in leadership roles at major technology companies, but they fail to acknowledge their role in that outcome.

Whether the CTA can maintain this level of representation going forward without asking the same speakers to return year after year depends entirely on whether tech companies hire women for leadership roles. This is precisely why landing a CES Keynote Address matters.

Keynotes give women the space to demonstrate their expertise and vision for the future to their industry in ways that other speaking roles simply cannot match. This, in turn, will result in more of these women being promoted or hired for the very leadership roles that the CTA maintains is necessary in order to qualify to be a keynote speaker. 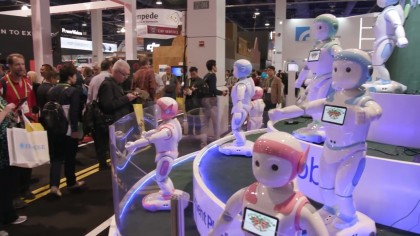 Without the Keynotes, women leaders are ignored by companies looking to fill leadership roles. Without serving in a leadership role at the head of a technology company, they cannot qualify for Keynote Addresses. This deadlock is precisely what keeps women and people of color from being fully represented in the industry.

CES 2019 is a huge step forward toward this goal, but the CTA itself has an opportunity to demonstrate the leadership that other companies haven’t shown so far by doing what everyone claims to want: innovative thinking.

By expanding the criteria for keynote speakers to include industry roles where women have already demonstrated the leadership and vision the CTA states keynote speakers must demonstrate, the CTA can discover and showcase a huge, as-yet-untapped pool of potential CEOs and industry leaders at its conferences with fresh ideas and perspectives. This, more than anything, will help correct the imbalance in the technology industry that the CTA says it wishes didn’t exist.

This Old Pool Has Developed Its Own Mini-Ecosystem