Robotics are incredibly difficult to master with all the required precise engineering that goes into everything from the mechanics to the system software to the overall function and usability. However, a new robot fighting league openly welcomes those who do not have the technical skill or time to battle their rather unique robots.

In essence, Hebocon is a sumo-wrestling style competition for people who are technically challenged in building the complex (and dangerous) robots such as those built for Battlebots. The competition is centered around 'crappy' robots that are hardly able to move to attempt a face-off and engage in the ODDEST, and awkward battle. The contest is the only one of its kind to present prizes to the winners of the competition. If you come second, you can even be awarded a cardboard box.

The objective of the game is simple, don't fall over, and don't fall off the table. The robots created are specifically designed to be terrible- the more terrible, the greater the handicap is awarded in an attempt to deliberately restrict 'good' or rather functional robots. If there is a tie, the winner is determined by which robot can go the farthest. In a hilarious frenzy, the robots are released in a massive round until only one remains.

In July 19, 2014, the first competition was organized and hosted by Hebocon Master Daiju Ishikawa in Tokyo, Japan. Now, just a couple of years later, many countries have begun to tag along in the competitions and host their own technically challenged robot duels.

The name is derived from the Japanese word Hebou which describes something that is technically poor, or low in quality. The creator goes on to explain

Heboi robots do not even move properly, and may break at the slightest impact. It will even fail to move forward smoothly. Such robots are worthless from an engineering standpoint, but they possess an appeal that impressive robots just do not have.

Why are some robots so Heboi? That is because their creators have Heboi technical abilities.

A creator with low technical capabilities does not factor in their own incompetence. They are likely to think of an amazing robot with all sorts of cool features before they actually go about trying to build it. In time, they will realize that they do not have the ability to realize the super robot in their mind, and so they make the compromise to build a simple robot instead. However, they will not be able to build even the simple robot they thought of, and so they will make yet another compromise, and end up building what we talked about earlier: a Heboi robot."

The competition has been an excellent gateway for young people to get a taste of engineering and robotics, or for adults who want to have a fun time but do not have the time (or perhaps skill) to build complex robots. Hebocon is truly for everyone. By achieving true Heboism, you can forget about setting up servomotors with Arduinos, using a soldering gun, or the calculations to determine what current and voltage to use. With Hebocon, you can reenter the state of mind of an eight--year-old, pick up some duct tape, cardboard, and a stick and whip together the most Heboi robot the world has ever seen.

To learn more about the robots or upcoming competitions, you can checkout the Hebocon website. 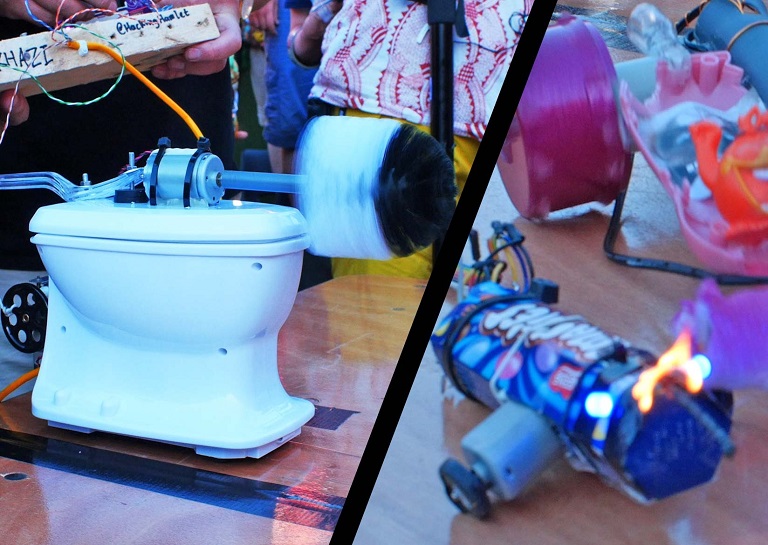