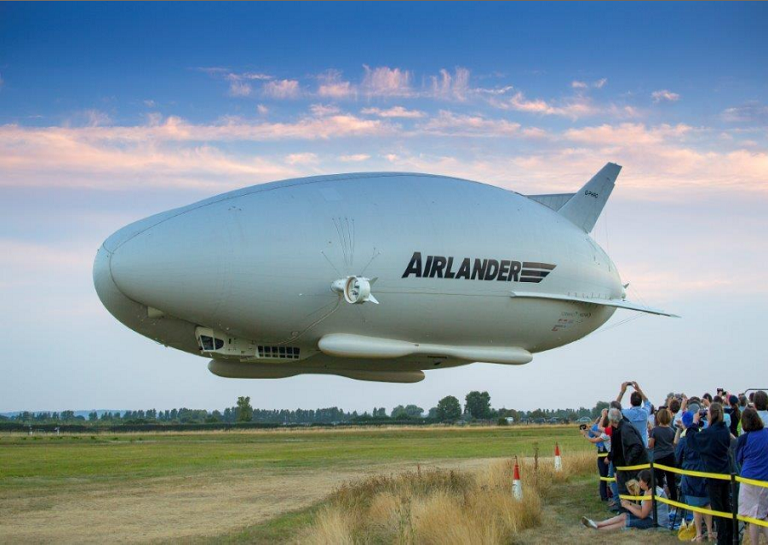 Airlander, the huge success that came to be after achieving record-breaking crowdfunding project that saw pledges reach over $1,000,000 dollars, recently took flight in their new massive helium-filled airship.

The ship that took flight dubbed the Airlander 10 began the maiden voyage at 19:45 on Wednesday 17th of August, before shortly landing thereafter at 20:00 before dusk. The aircraft flew only 3 kilometers, however, it reached a speed of 35 knots and more importantly, was able to prove the functionality and verify the ship is a viable alternative to other modes of transportation. The company who engineered and constructed the craft hope to revolutionize the aerospace industry and provide cleaner, more efficient methods of transportation in the near future. With a functional prototype already made, the company is already well on-route.

Below you can see the airship in action:

The Airlander 10 is currently the world's largest aircraft at 92 meters long. The large helium-filled ship recently took its first flight last Wednesday at an airfield located about 73 kilometers north of London.

The blimp-shaped craft is a crossover between a blimp, helicopter, and airplane which allows it to fly for days on end whilst maintaining a cruising speed of 148 km/h. The precisely engineered helium-filled hull is surprisingly aerodynamic with the ability to produce up to 40% of the vehicle's lift with the other 60% produced by the helium fill. The 20,000 kg craft is also able to carry a payload of up to 10,000 kg.

Providing the rest of the power to produce the thrust necessary to stay aloft is four 325 hp, 4 liter V8 direct injection, turbocharged diesel engines. The engines are mounted in pairs at the front and back, all of which are configured with a vectored thrust system to be used for stabilization during take-off/landing/ground handling operations, as well as enabling it to hover.

Currently, however, the passenger/payload section measures only  3.2m x 7.2m x 1.7m. Although, a larger section is being developed for the production model. Similarly, the Airlander 50 which is said to be the big brother of the Airlander 10, will be able to carry five times as much cargo while also being able to transport goods more efficiently, economically and more fuel effectively than any other aircraft currently in use- with the added ability to land on water, ice, snow, or virtually anywhere else (minus atop of trees).

The company has a vision to lift the restrictions currently hindering other aircraft. That includes the ability to take-off and land virtually anywhere, fly for weeks on end, and maintaining a low-cost, minimally pollutive transportation mechanism.  With a functional ship already developed, the company expects to roll even more efficient models out by 2020.