Wearable technology is no longer just a novelty. There is technology out there that could actually help save your life.

Wearables or wearable technology is another term that has been thrown around consistently over the past couple of years.

You have seen it in think-pieces, on end of the year gift lists, and there is even a very good chance that you are wearing a piece of wearable technology right now.

What is wearable tech? Basically for the uninitiated, wearable technology is an umbrella term used to describe electronics that can be worn on the body, either as an accessory or as part of the material used in clothing.

Think of your Apple Watches or Fitbits: even the google glasses were considered wearable tech at some point.

Across the globe today, there are countless types of wearable technology but the most popular devices on the market center around activity trackers and smartwatches.

Pushing the Internet of things forward or IoT, wearable tech’s most notable feature is its ability to connect to the internet, enabling data to be exchanged between a network and the device, sending and receiving data in real time.

Now for most, wearable tech has been more of a novelty rather than something you can integrate into your daily life.

However, that is changing and there are new forms of wearable technology that are changing people’s lives on a daily basis.

According to the World Health Organization, an estimated 17.9 million people died from Cardiovascular Disease in 2016, representing 31% of all global deaths.

Understanding one’s heart health in real time could work wonders in lowering this statistic and even save lives. KardiaMobile and KardiaBand aim to tackle this issue.

Irregular heartbeats can happen at any moment, sometimes without the victim even knowing. Also known as atrial fibrillation, it is the common form of heart rhythm disorder and is associated with a heightened risk of stroke.

The only way to properly track and analyze the risk of an irregular heartbeat is by going to the emergency room and getting an electrocardiogram (ECG) test.

In short, the KardiaMobile and KardiaBand are a mobile ECG, that can read and analyze any discomfort in one's chest with one single 30-second reading.

The Aira could help make the lives of the blind much easier.

The wearable glasses service acts very much like a little voice in the users heading guiding them throughout the day, to avoid obstacles or dangers.

While wearing the camera-equipped glasses the user is guided by a concierge-like representative on the other end watching out for the user and helping tackle tasks that may have been deemed difficult.

The highly customizable service comes in at various price points to fit the users' needs, ranging from $89 to $329 a month.

As most would probably agree, having a person in your ear all day is a little creepy, the company hopes to equip the wearable device with an AI-powered system in the future to help lower costs on both ends of the business.

You may love the sunlight but too much of it can have harmful effects on your body.

Long-term sun exposure can lead to a range of health issues ranging from mild things like sunburn and premature skin aging to more serious risks like permanent skin damage and eventually skin cancer.

According to Health Communities, more than 90% of skin cancers are caused by sun exposure. The L’Oreal UV Sense could help you be ready for excessive UV rays.

Created by the wearables company, MC10 for the massive cosmetics brand, L`Oreal, the tiny sensor notifies users information about UV ray and when they are most exposed to the sunlight. 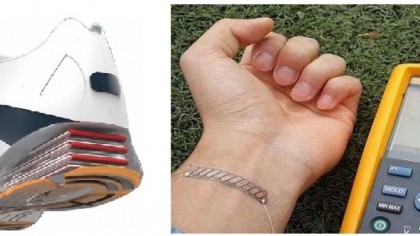 Battery-free and only nine millimeters in diameter and two millimeters thick, the tiny device can be worn on the user’s thumbnails throughout the day for almost two weeks.

After the two weeks, the data can be uploaded to a smartphone to give recommendations on the user’s sun habits, and ways to protect the skin when outside.

Breast cancer is a large issue across the globe and it is crucial for women (and even men) to find a way to consistently track their breast health.

Based off of information from the World Health Organization, in an estimated 508,000 women died in 2011 due to breast cancer. The iTBra could help solve this growing issue.

Mammograms are a big part of being able to detect tumors early and the iTbra can do just that.

Created by Cyrcadia Health, ITBra uses wearable dual patches that can be inserted into a bra to monitor circadian metabolic changes in heat that correlate to accelerated cellular activity common in breast tumors.

The data itself is sent straight to a PC or mobile device and can be shared directly with your personal physician.

You want to be able to monitor and take care of your newborn, even for the occasional moment that you are not watching them. Owlet allows you to track the health of your child through the power of a smart sock.

The wearable uses oximetry to measure the O2 levels and heartbeat, while continuously providing parents real-time data via Bluetooth and a smartphone app.

What are some wearables that you use in your daily life?