From wireless charging to facial recognition, Apple's latest product launch included some of the biggest innovations ever announced by the company all from the stage of the new Steve Jobs Theater.

Apple just released a slew of new technology, with the biggest updates coming from Apple Watch and of course, the long-awaited iPhone 8 and iPhone 8 Plus. However, the largest announcement came just as the event seemed to be finishing up -- the rumored and much-speculated-about iPhone X.

Here's everything that happened during Apple's presentation in the brand new Steve Jobs Theater in Cupertino, California.

In what CEO Tim Cook called "the biggest leap forward since the original iPhone," Apple officially launched the iPhone X. Despite the barrage of leaks in the week before the launch, the iPhone X presentation still wowed the crowd.

"It's only fitting that we're here in this place on this day to reveal a product that will set the path for technology for the next decade," said Cook in his introduction.

The biggest news came as confirmation of a lot of rumors. iPhone fans will notice immediately that the iPhone X lacks the home button. The company revealed they're using FaceID to unlock the X. Apple confirmed the longstanding rumor that they're moving toward facial recognition.

"It's the future of how we'll unlock our smartphones," said Jeff Williams, COO of Apple.

The true depth camera system with an infrared camera, front camera, and dot projector. Each time you look at your iPhone X, these tools will recognize the user's face through neural networks to match the face it registers with the one saved by a user.

Apple even built a Neural Engine to process the recognition. They built it specifically for a set of machine learning algorithms. The engine is an ultra fast processor that can perform over 600 billion operations per second. The Neural Engines have trained the neural networks against photographs or even masks of a person.

"We require user attention to unlock," Williams said, so no one can knock out a user and try to get access to their phone. Williams noted that the chances of someone randomly logging into a user's phone with FaceID are one in 1,000,000.

The purely hardware updates are also incredibly impressive. The iPhone X, the gadget to honor a decade of the iPhone, is made of surgical grade stainless steel to form a continuous surface front to back. It's water resistant and dust resistant, and it comes in two colors -- space gray and silver. Its OLED display runs 5.8 inches along the diagonal. It offers a 458 ppi pixel density which is the highest in an iPhone. It also has a 2436 x 1125 resolution.

Without a home button, the iPhone X requires a lot more screen touching and less button pushing. To clear out of an app, simply swipe up. Swipe and holding an app will bring the apps into multitasking mode. Users can raise to wake up the screen or tap it.

Apple's iPhone section of today's presentation was easily the most anticipated section of the whole day. When Cook announced the iPhone 8 launch, the crowd applauded harder than any section before it. While not quite as shocking as the iPhone X, the iPhone 8 and 8 Plus certainly offered a fair share of oohs and aahs.

"Technology infused with humanity could improve people's lives and change the world," Cook said. "Our intention with iPhone has always been to create something so powerful, immersive and magical that the hardware essentially disappears."

The new iPhone 8 design is all new with glass in both the front and the back. The matching aluminum finishes give it a seamless look. Also, the company promises it's got the most durable glass ever on a smartphone. (We'll give YouTubers a week before putting that statement to the test.) Like the X, the 8 is microscopically sealed to be water and dust resistant. It has a 4.7 inch retina display on the 8 and a 5.5 inch display for the Plus.

The screens of the iPhone 8 and 8 Plus also use true tone technology which allows visuals to take into account the ambient light around the phone.

Inside the iPhone 8 and 8 Plus is a new chip called A11 Bionic - "most powerful and smartest chip in a smartphone," according to the company. It has a 6 core CPU, two performance cores that run 25 percent faster than the A10, and four high-efficiency cores 70 percent faster than A10.

Here are some major points with the iPhone's treasured camera:

A surprising update from Apple came with its Apple Watch announcement. Series 3 debuted with a feature that could save smartwatches as a market -- cellular. Users no longer have to carry their smartphones with their watches in order for the product to work. The Series 3 will make calls from the watch.

According to Cook, Apple Watch grew over 50 percent compared to previous year and officially became the number one watch in the world.

The company called it the next generation of Apple Watch. With cellular built in, users now have the freedom to go anywhere with just the watch. It comes with a dual core processor with 70 percent improvement. Apple even developed a W2 custom chip delivering more efficiency while being 50 percent fewer power needs.

The addition to cellular takes out the biggest concern people had with smartwatches. People began asking themselves why bother buying a watch that still requires a connection to the phone. With so much in the watch, how did they fit the large pieces of cellular?

Rather than add an antenna, the whole face of the watch is the antenna. The company also developed an electronic SIM, which is a fraction of the size of even nanoSIMs. The Series 3 is the same size as Series 2 with a small extension of the back crystal just the width of two sheets of paper.

There are also enhancements to the health portion of the watch, which remains Apple's key purpose in developing the Apple Watch technology. Here are some highlights:

- gym kit that combines machine metrics with the watch

Pre orders start on Sept 15 and can be fully purchased on Sept 22. Watch Series 3 with cellular starts at $399 USD.

The company started the live stream with a look into the stunning new facilities at the Steve Jobs Theater, giving the world its first true glimpse inside one of Apple Park's most beautiful spaces. Rounded architecture, clean lines and white open spaces starkly contrasted the crowded debut spaces of former years.

The showcase kicked off the only way appropriate to consecrate the Steve Jobs Theater; the voice of the late Apple CEO and Founder flooded the auditorium while simple

"That's what will keep Apple Apple, if we keep us, us," he said, playing audio from an old Jobs interview.

"It was only fitting that Steve should open his theater," said Cook. "It's the honor of a lifetime to welcome you to the Steve Jobs theater... There's not a day that goes by that we don't think about him. Memories have especially come rushing back as we've prepared for today and this event."

Cook took an introduction that could've been depressing and droll and reminded Apple fans exactly what made Jobs so visionary. In the introduction, Cook seemed to silence critics who claimed the company refuses to return to its roots. Cook inadvertently addressed everyone who said "Steve wouldn't have done it like that" in a very moving introduction.

"Today and always, we honor him," Cook said, visibly moved by delivering his presentation.

"Apple Park has been built to reflect Apple's values" of both technology and environment, Cook said. Over time, Apple developed a gray slab of concrete into a lush space that's been the dream setting for drone videographers for months. 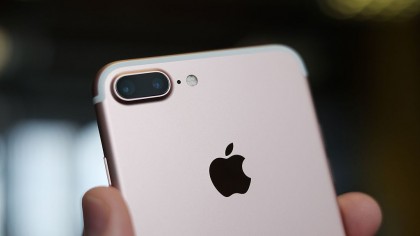 Powered by 100 percent renewable energy, with one of the largest on-site solar installations in the world. Designed with attention to detail. Visitors center open this year with augmented reality to tell visitors how the park was built. And of course, like any good visitor's center, it has its own retail store. It'll certainly be one of the most tricked out gift shops in the world.

We'll continue updating this story as more innovations come along from Apple.