Make your own cloud chamber in less than 10 minutes to see charged particles zipping through your room!

We all have been educated at some point in life about radiation that bombards the Earth from outer space and radioactive decays surrounding us all the time. However, these harmless particles are invisible to naked eye. But, if you really need a proof that radiation is made up of high-energy particles, there’s a really simple way you can do that by building a cloud chamber. Invented by Scottish physicist Charles Thomson Rees Wilson, the cloud chamber is a simple device that can let you observe the tracks that these particles leave behind. But before building one, let’s first understand how cloud chambers actually work.

Cloud chamber, especially the diffusion type is based on the principles of heat transfer. The device comprises of a container that is sealed with one surface being cold and one hot. The difference in temperature allows the formation of mist (or “clouds”) from alcohol that’s spread within the container before sealing it. This phenomenon occurs because the warm top part of the container tries to vaporize the alcohol, but it gradually starts to cool as it falls down and condenses at the bottom of the container. The volume present between the top and bottom surface of the container thus forms a cloud of supersaturated vapor. In these conditions, when radiation passes through the vapor cloud, it knocks off electrons from the air molecules and forms ions. These charged ions attract the alcohol vapor and form tiny droplets that eventually fall at the bottom of the container. The particle tracks are revealed as these droplets fall down that resemble streams of light or trails left behind an airplane.

The best way to observe these particle tracks is by building your own cloud chamber using materials that are easily available. Here’s a list of materials required:

3. Dry ice (frozen Carbon Dioxide that is often used at fish markets and in grocery stores for keeping the items cool)

Steps to Build Your Own Cloud Chamber:

1. Take the felt and cut it into the size of the bottom of the container and glue it down at the bottom surface. It is important that the felt is tightly glued to the bottom to avoid it from falling down when the tank is flipped upside down.

2. The next step is to soak the felt in isopropyl alcohol so that it is completely saturated. But make sure that there isn’t any excess liquid. If you poured it in excess, drain out the extra liquid.

3. Take a separate container to place the dry ice and cover it with the lid. Make sure you use thick safety gloves while handling the ice.

4. Now, flip the tank or container upside down such that the felt side is on the top and the mouth of the container is at the bottom and on top of the lid that you used to cover the dry ice.

5. Wait for about 10 minutes to let the container cool down. You can use a dish of warm water and place it on top of the container to heat the alcohol faster and turn it into vapor.

6. Finally, turn off the lights and shine a flashlight through the side of the container to see visible particle tracks within the cloud.

Understand the Type of Particles from the Tracks

While many types of particles would pass through the cloud chamber, you can differentiate between the particles from the tracks that they leave behind. 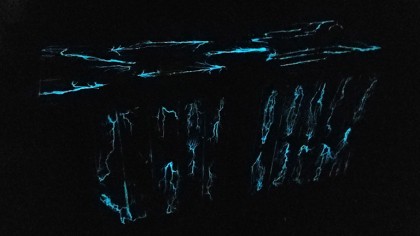 DIY Liquor Cabinet Comes with its Own 'Lightning Technique'

Short and Thick Tracks: When you observe short and bulky tracks, you’re seeing alpha particle that’s separated from atmospheric radon atom, which is a naturally occurring radioactive element. Since the alpha particles from the radon atoms are low in energy, they leave short and thick tracks.

Long and Straight Tracks: These tracks are formed by Muons (a massive and unstable subatomic particle similar to Electron). Muons are produced when cosmic rays collide into the atmospheric molecule, and because of their massive nature they easily make their way through the air and leave behind long, straight tracks.

Curved or Zig-Zag Tracks: These types of tracks are formed by Electrons and Positrons (Electron’s anti-matter partner). These particles are created in a similar fashion when a cosmic ray hits the atmospheric molecule. But, because the particles are lighter, they bounce around and leave behind zig-zags or curly tracks.

Forked Tracks: If you see the tracks splitting, you’re seeing particle decay, i.e. Muons breaking into smaller particles such as Electrons and Neutrinos. These particles split into different directions and thus leave bent or forked tracks.

See More with Your Cloud Chamber

If you’ve got some radioactive materials around, try to place them near the cloud chamber to see the effect of increased radiation. There are many everyday materials that are radioactive, such as Banana, Brazil nuts or Ceramics.

You can even apply a magnetic field to the cloud chamber and observe how positive and negative charged particles move in opposite directions in response to the field.

Here's How to Make Your Own DIY Flamethrower From Scrap

Here's How to Make Your Very Own 40K-inspired Chainsword