Want to keep your information safe? Here's one step toward making sure your data doesn't wind up in another breach.

The words "Facebook" and "privacy" seem to be inseparable -- and not in a good way. Given the recent events of the Cambridge Analytica issue, countless celebrities and computer science innovators have called for users to delete their Facebook accounts entirely. 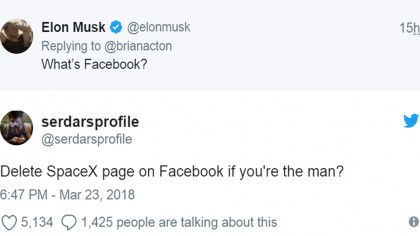 Elon Musk Deletes All of His and His Companies' Facebook Accounts

However, this might be a bit too difficult for billions of users around the world who still use Facebook to connect with friends and family. Rather than delete their Facebook accounts entirely, there is a way users can still preserve their information (at least more efficiently than they have been).

Third-party apps often have access to more than users realize when they mindlessly click that they've read the terms and conditions. Yes, whenever you continue wanting to know what color your Jedi lightsaber would be through a third-party quiz app, that company gets information about you. Users can delete permissions for these apps in just a few minutes.

Facebook also recently updated this process in the wake of the Cambridge Analytica scandal. Rather than taking almost a half an hour, the new process takes just minutes.

You'll see a page filled with the various apps you've used while on Facebook or through Facebook. From there, simply click on each app you want to deny access or don't trust, and click the Remove button and get rid of their permissions.

Note: This doesn't stop Facebook itself from keeping tabs on you. In order to truly be free from the risk of being involved in another Cambridge Analytica event in the future, you'll have to delete Facebook entirely. There's even been some discussion regarding Instagram, as Facebook owns that social network as well.

And if you really want to keep your information protected, think about how much you give Google, Amazon, Microsoft, Twitter, and other online services each day.

How Fingerprints Can Provide Information on Your Lifestyle, Habits, and Health