The incessant noise of a jet boat on a lake or river can be pretty annoying, but it could also save a life. Two clever boaters put out the beginnings of a possible deadly grass fire at the edge of a lake using the wake from their jet boat.

The brave pair were taking their vintage 1987 Eliminator Scorpion jet boat for a spin on the South Thompson River in  Kamloops, British Columbia, Canada when they spotted a grass fire at the edge of the shore. Knowing these kinds of fires can quickly escalate into fast spreading forest fires, the pair went to work on extinguishing the blaze, with what they had at hand...their boat.

This model of jet boat, instead of using a propeller to move the boat forward, sucks up water that it then pushes out with force to propel the vessel.  This process can create a large trail of water out the back of the boat, known as a rooster tail. 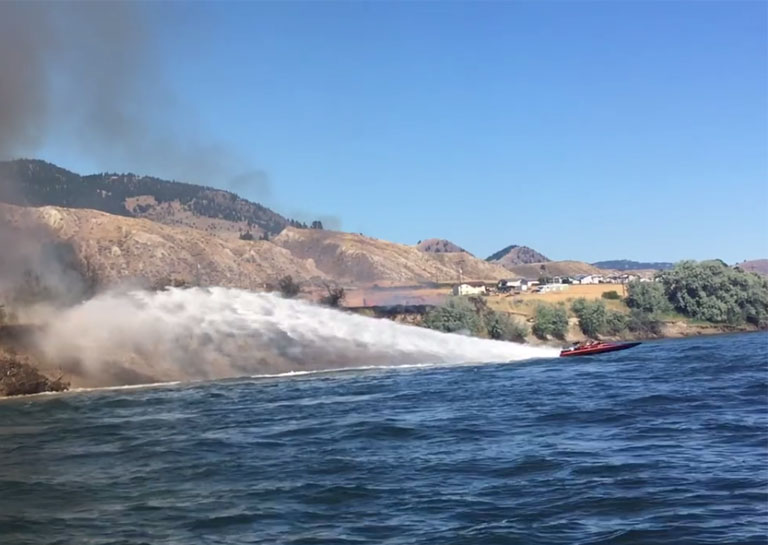 The pair uses this tail to try and spray water on the fire. The pair maneuvered their boat close enough to the river's edge to successfully hit the flames with the water tail. They repeated their skillful boating moves four or five times, managing to almost completely extinguish the flames before the local fire authorities arrived.

The dramatic escapade was captured by a fellow boater and the subsequent video has garnered a lot of attention on Facebook, reaching more than  100,000 views and shared more than 2,000 times. Commentators on the social media platform have called the couple, Tasha Hunt, 33, and Koyne Watson, 43, heroes.

The engaged couple described the event to local news, “We saw it smoldering and we thought, ‘Oh my god, there’s a fire!’ So we phoned it in and we headed over there. The flames had taken off. We spun the boat around. He [Watson] just started making passes. He was going around and around. He said, ‘Oh my god, am I getting it?’ I said, ‘Koyne! You’re putting out the flames!’”

The couple reportedly damaged the engine of their high-performance jet boat during the firefighting. The boat's owner, Koyne said, “we probably did it about eight times. But I think we probably only did about four or five direct hits.”

Fire attended to by local authorities

The fire was eventually extinguished by the Kamloops Fire Rescue platoon with some assistance from a forestry helicopter. The fire was fierce enough to close the nearby Shuswap Road in both directions.

Kamloops Fire Rescue platoon captain David Ferguson described how these types of fires can be dangerous if left unattended for too long. He commented that if people can assist in controlling fires without putting themselves or their property in danger, then they are welcome to do so. He stated, “As long as you’re not endangering people on the water, any chance we can get to help keep the fire from progressing helps,” Ferguson said.